It is a dark and stormy night when Tristram (Spencer Conway) arrives at a rickety three-story home called The Pines in the British countryside to assist his firm’s client, Roland (Jeremy Southard), in the purchase of the property Roland currently rents from his dodgy neighbor Leslie (Eric Nepom).

Roland has succeeded beyond expectation in the bucket business and now spends most of his time drinking. His wife Elizabeth (Christy Drogosch), a retired dancer, has had enough of both Roland and the house, and schemes with her brother Mark (Garland Lyons) to leave him. Meanwhile, Mark schemes to get his fiancée Kitty (Shawna Nordman) to come back to him.

Such is the set-up for Alan Ayckbourn‘s riotous 1979 comedy, Taking Steps, currently running at Lakewood Theatre. This is a story where everyone has a plan, except for the hapless Tristram. The young solicitor seems to have difficulty getting his footing in what should be the most routine of transactions, to great comic effect. Spencer Conway is a deft comic actor–a skill that comes in handy when Tristram finds himself in any number of, shall we say, awkward situations.

As for the steps? There are plenty of them to take, as the characters go upstairs, and up more stairs, and then down again. But the key to this play is not in flights ascended and descended. By 1979, the feminist movement was afoot, even in the English countryside. An astute social critic, Alan Ayckbourn was well aware of the conundrum facing western culture regarding women. Taking Steps addresses the dilemmas facing the two female characters, and which steps they ultimately will decide to take regarding their futures.

Taking Steps is directed by Brenda Hubbard, with scenic design my John Gerth and costume design by Grace O’Malley, lighting design by Juniper and Nate Zwainlest, and sound design by Kurt Herman. It can be seen at Lakewood Theatre through April 7.

Our souls at nightPlay Reviews 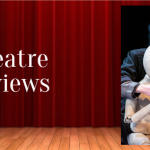