In a haunted theatre in 1935, three characters gather with a renowned Russian medium to have a little chat with the long dead theatre imprasario David Belasco. His angry spirit has wandered the place for years. If they could just reason with him, say, and find out what the problem is, he might go away quietly and the theatre could be reopened. This is C.S. Whitcomb‘s comedy/farce The Ghost of David Belasco, celebrating its world premiere at Lakewood Theatre Company. 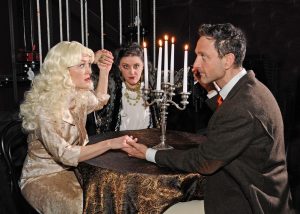 The loud-of-voice medium Madam Blutovsky (Margo Schembre) attempts to summon Belasco’s ghost for Gussie (Lisa Knox), Steven (Tom Walton), and Abigail (Kelsey Glasser). But somehow, things go horribly awry. Sure, Belasco (Todd Hermanson) is there rattling around somewhere, but an unexpected ghost, that of Steven’s father (Mark Schwahn) bursts onto the scene with something to say as well. Lights flash, things bang and sizzle and crash. And then there is a murder. Or is it a murder? Is it a man or is it a woman? Is there a body, or is that a pile of discarded sheets? The authorities (Matthew Sunderland and Melissa Standley) are summoned, and Reggie (Lucy Pascal) runs onto the stage to announce that the theatre’s emergency doors have been fused shut by lightening. It is then that the audience realizes this is a play within a play taking place during a storm in Portland, Oregon! 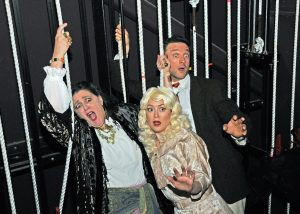 As the drama and silliness build, the audience will struggle to keep track of what is really going on. Directed by Stephanie Mulligan, the script and a strong and lively cast keep one guessing. Nothing is as it first appears. When ghosts must be appeased, all bets are off.

The play runs through February 12 at Lakewood Theatre in Lake Oswego, and is part of the theatre’s 70th season. Tickets are available here. 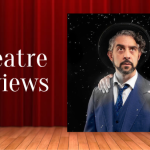 The Battle of Bedford FallsPlay Reviews 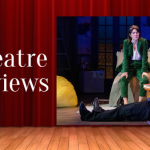