It’s an odd collection of characters assembled on the Artists Repertory Theatre stage in Lauren Gunderson‘s The Revolutionists. They include the French feminist, activist, and artist Olympe de Gouge (Jamie M. Rea); Charlotte Corday (Joellen Sweeney), notorious murderer of Jean-Paul Marat; the doomed French queen Marie Antoinette (Amy Newman); and Marianne Angelle (Ayanna Berkshire), a free woman and activist from the Caribbean who works toward a revolution (and the abolition of slavery) for the French colonies of the Caribbean. 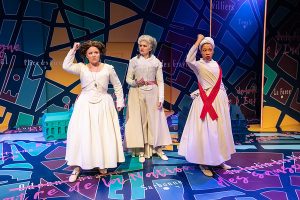 A stuffy historical play, you say? Not so fast. While this is a play about four women who lived boldly during the French Revolution’s Reign of Terror, it’s also a comedy. A very funny comedy. About very real life issues.

Director Lava Alapai demands rapid-fire deliveries from all of the characters, followed by eye-rolling pauses, thereby enhancing the action and putting a distinct signature on The Revolutionists. The lines come fast and furious, with perfect timing–clever, witty, biting. This is a play about four “badass women”, three of whom are beheaded. There is no time for wussy behavior. These women each have a mission coupled with a paucity of time. 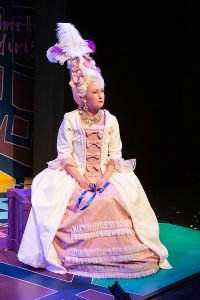 Amy Newman in The Revolutionists. Photo by David Kinder.

Humor has a way of softening harsh truths. This is a big-picture play about women in society then and now that is so brilliantly written it never comes across as preachy. It reminds us why, 200 and some years later, thousands of years later, we are so fed up. But here also are femininity, sharp assessments, a sense of moving forward, and always the humor.

Lauren Gunderson is one of the most produced playwrights in the U.S. She also represents a diverse group of mostly younger playwrights (many in their 30s) who are turning out brilliant works dealing with the most pressing issues of our times. Liberty, Equality, Fraternity, and all the rest. (Yes, the top 10 Best American playwrights to date are all men, and all white with the exception of August Wilson, but the times are-a-changin’.)

The Revolutionists runs on Artists Rep’s Morrison Stage through through May 26.