“Every idiot who goes about with ‘Merry Christmas’ on his lips, should be boiled with his own pudding, and buried with a stake of holly through his heart.”  –Ebenezer Scrooge 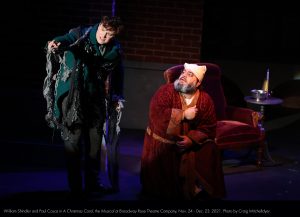 Paul Cosca leads the cast as the miserable miser Ebenezer Scrooge. It’s Christmas Eve, seven years since his business partner Jacob Marley died. People are hitting him up for money and dispensing Christmas cheer, which makes him grumpier than usual. After a bowl of something awful, Scrooge prepares for bed, only to be confronted by Marley’s ghost (William Shindler) in a show-stealing performance of the song “Link by Link”.

There will be more ghosts, Marley informs Scrooge, and there are, leading him through his life past, present, and future. It’s a small cast that also includes local fifth grader Francesco Germano as Tiny Tim, Robert Head as Fred and young Ebenezer, Emily Sahler as Mrs Cratchit and Mrs. Fezziwig, Valentina Silva as Emily, Tom Slater as Bob Cratchit and Mr. Fezziwig, and Victoria Spelman as Ghost of Christmas Past. The actors also take on additional roles throughout the show, making this seem like a larger production than it actually is.

The show is directed by Dan Murphy and Annie Kaiser, with music direction by Darcy White and choreography by Robert Head. It is an energetic and pleasing production only 90 minutes in duration and suitable for everyone ages six and over.

As a shameless enthusiast, I have watched every movie version of A Christmas Carol I could, with the exception of the Smurfs and Flintstones versions. (I mean, really?) My favorite throughout the years remains the 1951 black and white movie starring Alistair Sims. While the musical version lacks the gravitas of the original story, it is a better than good telling of the tale. Make reservations now if you plan to attend!

A Christmas Carol, the Musical runs through December 23. Performances are held at The Broadway Rose New Stage, 12850 SW Grant Avenue in Tigard. Tickets are available here.