What constitutes community? Is it the neighborhood you were raised in, or your high school? Is it the corner market where you bought penny candy as a kid, and that vacant lot where you built forts, and the old lady who lived next door? Perhaps it’s your church. Endless possibilities…. 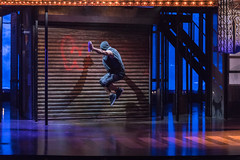 UJ Mangune in In The Heights. Photo by Owen Carey.

In The Heights (book by Quiara Alegria Hudes, music and lyrics by Lin-Manuel Miranda) explores the values of home and community in the Washington Heights neighborhood of the mid-2000s. Conceived by Lin-Manuel Miranda and directed by May Adrales, this high-energy musical blasts onto the Main Stage of Portland Center Stage at the Armory with the force of a Caribbean gale.

It’s a fun, fun show. How could it not be with  its salsa, hip-hop, and rap, its hot pants and stiletto heels, its gossipy Hispanic neighborhood feel? But there’s a lot going on. The community is on the cusp of change, and nobody knows what’s coming next. 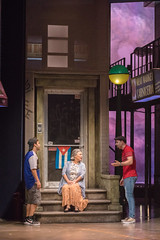 Nicolas Garza, Debra Cordona, and Ryan Alvarado in In The Heights. Photo by Owen Carey.

It’s a lively place to call home–even though everyone seems to want out– populated by first generation Cuban- and Dominican-Americans and Puerto Ricans and their immigrant parents, with the aged and wise Abuela Claudia (Debra Cardona) at the center of the community. Usnavi (Ryan Alvarado) with help from his cousin Sonny (Nicolas Garza) is trying to keep his corner market open.  Daniela (Lillian Castillo) is closing her beauty shop and moving it to The Bronx. Nina, played by understudy Paola Hernandez the night I saw the show (she killed it!), is home and in culture shock from her first year at Stanford. Benny (Alex Nicholson) is smitten, but Nina has a big problem to resolve. There are other love interests too, competing for attention with the general financial woes of the neighborhood.

In The Heights takes place over the three-day July 4th weekend, bringing home the theme of immigrants and what they contribute to this wonderful hodge-podge, the United States.

Manhattan’s highest point is in Washington Heights, a narrow strip of approximately 40 blocks flanked by the Harlem River on its east side and the Hudson on the west. It was named for Fort Washington, where George Washington and his troops lost a major battle in 1776, and has been occupied by immigrants since the Dutch kicked out the indigenous Muncee people. It has served as a haven to influxes of Irish, Armenians, Puerto Ricans, European Jews, and Cubans. 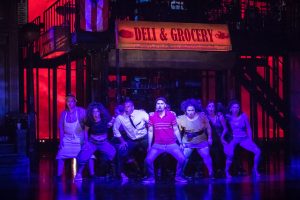 In The Heights cast. Photo by Owen Carey.

In the 1960s, thousands of Dominicans fled their country during political unrest, and landed in Washington Heights. By 2008, when the show opened on Broadway, Washington Heights was 74 percent Dominican. Since that time, it has experienced the attention of Millennials, who now make up 10 percent of its population. “Today, the musical stands as a living snapshot of this neighborhood’s rich history, its momentous diversity, and its ongoing daily challenges,” says Benjamin Fainstein, PCS Literary Manager.

Miranda’s vision for In The Heights began in 1999, his freshman year at Wesleyan University. There it evolved into an 80-minute one-act. He continued, with others, to work on the show. In 2004 Quiara Alegria Hudes joined the team to write the book. It’s a huge production, with a cast of 27. It’s equally large creative team includes William Carlos Angulo, choreographer; Eugenio A. Vargas, musical director/conductor; Tim Mackabee, scenic designer; David Israel Reynoso, costume designer; Robert J. Aguilar, lighting designer, Sharath Patel, sound designer.

In The Heights runs through October 13 at Portland Center Stage. This exhuberant show can be enjoyed by ages 10 and up.

Tales from another eraPlay Reviews