Cydoni Reyes and Noelle Guest in Anatomy of Gray at Twilight Theater Company.

Gray, Indiana, is a very boring place, at least according to 15-year-old June Muldoon (Cydoni Reyes), who should know as she’s never been anywhere else. Same old, same old, until the day a tornado spews the handsome and mysterious Galen P. Gray (Jon Gennari) into her small town and June is instantly smitten.

Thus begins Twilight Theater Company‘s most recent production Anatomy of Gray by Jim Leonard, Jr. It is the late 1880s, and June’s father has recently died, leaving June’s mother Rebecca (Noelle Guest) bereft, pregnant, and wondering how on earth she can support another child. June prays for a doctor to come Gray so that sick people may be helped and survive their maladies. When the stranger tells the townspeople he’s a doctor, she believes her prayers have been answered.

But there’s more to Dr. Gray than meets the eye. Yes, he does help the people of Gray. But he has an odd aversion to blood. Rebecca finds him praying in a foreign language in the local cemetery. And soon, some of the locals notice curious “marks” on their bodies–marks that cause them to sicken.  Belva Collins (Kristina Verbruggen) is the first person to die from an infection caused by the “mark”. Her husband Crutch (Doug Dean) is heartbroken, and Pastor Phineas (Arun Kumar) goes so far as to suggest that perhaps Dr. Gray, the outlier, is to blame. 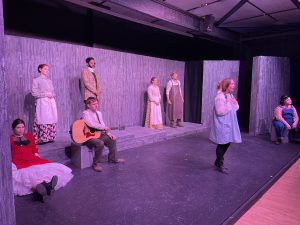 The cast of Anatomy of Gray.

Anatomy of Gray is a play that touches on many contemporary issues. It leaves the audience with questions to ponder long after the curtain falls. Additional cast members include Nathan Franklin as the Guitar Man; Ryan Larson as Homer; Erica Hatfield as Maggie; and Bereanna Kurth as Tiny. Alicia Turvin directs the play and designed the simple but evocative set. Light design is by Genevieve Larson, sound design by Ilana Watson and Nathan Franklin, and costume design by Amanda Cobb. 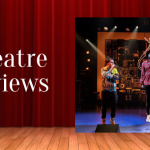 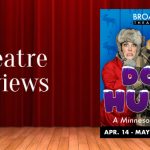