Fuse Theatre Ensemble is back, and has found a new home in The Back Door Theater at 4319 SE Hawthorne Blvd. (behind Common Grounds Coffeehouse). With a place to call home, the troupe has announced its 2021-2022 season, aptly called Transitions.

To continue the legacy of Queer-focused work that has become a hallmark of both Fuse and The Back Door Theater over the past two decades, the company offers as its first work Becoming Understood, written and performed by Portland actor and playwright Jane Comer, a trans woman. Comer’s recent body of work includes “The Fear of Speaking” and “I Am An Actress: A Passion Play”, both autobiographical works covering different aspect’s of Comer’s life. The shows are presented in back-to-back repertory over the coming weeks. Each live performance is followed by “Becoming Adorable”, filmed and edited by Comer. I attended “I Am An Actress” followed by the film.

“I Am An Actress: A Passion Play”, directed by Sara Fay Goldman, opens to the ragtime music of Scott Joplin. “I set the world off balance,” Comer announces. “Do I look really scary to you?”

Well, no. She is a tall, rather ordinary woman, save for the long blond hair and eyes the color of a steller’s jay that sparkle from beneath her bangs. She’s shy, but that has not stopped her from accomplishing extraordinary things. 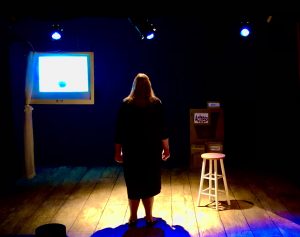 This story gives a detailed account of her early life. “I knew I was Jane when I was four years old.” She also knew she belonged in the theatre. When I interviewed her two years ago, I asked Comer when she first got interested in being an actress. Six years old. Performing early on was an escape from the discomfort from living in the hostile and unaccepting world of rural Oregon. However, in high school Comer met Mr. Klein, the school’s drama instructor, and he became a sort of father figure, a bit of protection from the outside world, a place to be herself, if only for an hour a day. His support influenced her life moving forward. This is an intimate story, told with courage, dignity, and wit.

In Comer’s short film, “Becoming Adorable,” she channels her alter ego, Amy Williams. Amy is a unapologetic lover and reviewer of the romances she enjoys watching on the Hallmark channel. Amy is naturally funny, and this is where we see Jane Comer The Actress! Her reviews are self-effacing and hilarious. Amy is no dumb blond. She knows why she loves Hallmark romances; she even tells us the standard formula for said programs. Her reviews are knowledgeable, sharp, and, well, totally Amy! Brava Amy Williams!