Analog & Vinyl (music and lyrics by Paul Gordon, book by Michael Berresse and Paul Gordon) is Broadway Rose’s first live musical since those halcyon pre-pandemic days we all took for granted. 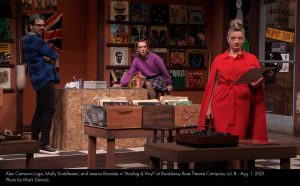 As our story opens, Harrison (Alec Cameron Lugo) is alternately stewing over the state of his vintage record store and attempting to deal with Rodeo Girl (Molly Duddlesten). Cute and spunky, Rodeo Girl hopes to interest Harrison in her charms, but he is in full Eeyore mode because he sits in the middle of a failing business that is about to go under. Why aren’t people buying vinyl? Why aren’t people coming to the store? And, by the way, Rodeo Girl, did you know that Robert Johnson let the Devil tune his guitar, and then his career took off?

Enter the mysterious Stranger (Jessica Brandes). She is a sharp contrast to the doom and gloom prevalent in Harrison’s shop, and she wastes little time in making her intentions clear. She seems to know everything about these two, and she can help them make their wildest dreams come true.

This is a cute, very smart rom-com musical that is full of laughs, surprises, and pithy truths about human existence. The music and lyrics are delightful, but let us remember that Paul Gordon is the same fellow who wrote the music and lyrics for Daddy Long Legs, Broadway Rose’s first fully staged, streamed production that ran last October. It would be difficult to choose a more appropriate show to celebrate the end of our confinement! 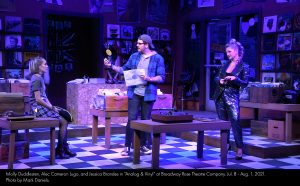 The show runs live through August 1 with various options for attendance: fully vaccinated with card; masks required; or fully open. Click here for tickets, the schedule of performance options, and how this all works for your safety and comfort. Additionally, theatre enthusiasts may stream the fully staged video production beginning July 16. Oregon Trail Cards are accepted.

Portland Center Stage’s annual JAW New Play Festival will bring audiences back into The Armory for live theater on July 23-25, for readings of four new scripts, along with performances from local artists, classes, and more.

This year’s JAW features Inda Craig-Galván’s A Hit Dog Will Holler, Ty Defoe’s Trans World, Rinne Groff’s The Red Beads (based on The Singer of His Sorrows by Osip Dymov), and Kate Hamill’s Ms. Holmes & Ms. Watson – Apt. 2B. Five local teen playwrights have also been commissioned to develop short scripts that will be read as part of the festival: Natalia Bermudez, Moss Johnson, Aaron Leonard-Graham, Becca McCormick, and Nevaeh Warren.

In addition to the JAW Play Readings, the festival features Press Play performances surrounding the readings. The JAW New Play Festival events are free and can be attended in person at The Armory, or online. Audiences are encouraged to reserve their general admission tickets in advance for the JAW Play Readings; in-person walk ups will be welcome based on availability. The Press Play performances surrounding the readings don’t require a ticket. Community Artist Labs are in-person only. Masks will be required in all areas, except for those at seated tables, enjoying a beer in the mezzanine bar. Capacity at The Armory is limited to 250 people. The full schedule and links to reserve tickets can be found at pcs.org/jaw.

What is the retirement plan for the oldest profession? As Ronald Reagan enters the White House, five aging practitioners of said profession are faced with a diminishing clientele, increased competition for their niche market, and aching joints. With wit, compassion, and humor, they struggle to find and learn new tricks as they fight to stay in The Life. Profile Theatre presents one of Paula Vogel’s earliest and most charming plays, The Oldest Profession, with eight open-air performances August 5-15 at the Barge Building. Click here for more information.