Once upon a time on Christmas Eve, the very small orphan, Buddy Hobbs (Jeremy Anderson-Sloan) accidentally crawled into Santa Claus’s bag and was transported to the North Pole, where he grew into a great hulking young man twice the size of his elfin peers. He also was a very bad toymaker. So Santa (Mark Pierce) sat him down and told him the truth about his short history, whereupon he took himself to New York City to search for his human father and bring a little Christmas spirit to the jaded city and its inhabitants. 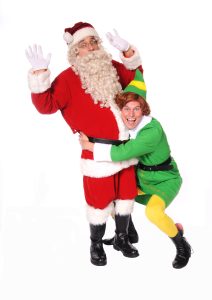 Elf the Musical, a reprise of last year’s popular production, burst onto the Lakewood Theatre Company stage early this season–no doubt to ensure that as many prople as possible can enjoy this delightful blast of Christmas spirit! As Buddy wanders the city streets in his green elf suit, he locates his father Walter “the ice man” Hobbs (Jeremy Southard), a grouchy Grinch of a man. Buddy also learns he has a lovely stepmother Emily (Sophie MacKay); a stepbrother Michael (Ben Barnes/Stella MacKay) who doesn’t believe in Santa Claus but is more than thrilled to learn he has a brother; and love interest Jovie (Camille Trinka). To muddle the plot, Walter’s boss Greenway (Michael Streeter) proves an even Grinchier character.

The sharply humorous book by Thomas Meehan and Bob Martin keep Elf the Musical from falling into that dark hole of Christmas corn. It is adapted from the 2003 movie. With its drama, romance, and plenty of laughs, along with lively and interesting music by Matthew Sklar and lyrics by Chad Beguilin, this is a show for everyone no matter their age.

Jeremy Anderson-Sloan brings a wonderful presence to his role as Buddy. His exaggeration and silliness always hits the right note, and he’s the perfect foil for Deb (Aurora C. Gooch), Walter’s assistant. They create stage chemistry with their great voices, especially in the duet “Just Like Him”. Another song of note, “Nobody Cares About Santa” sung by a rousing chorus of fake Santas plus Buddy, is a show stopper–as is choreographer Terry Brock’s solo tap dance! 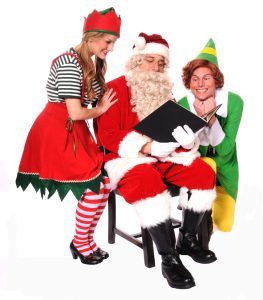 Elf the Musical runs Thursdays through Sundays through December 18. Additionally, Lakewood Theatre Company is presenting two special youth performances of Elf Jr. the Musical on December 10 & 17. This version is shorter and features students in the roles! Tickets are available here. 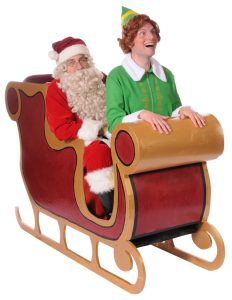 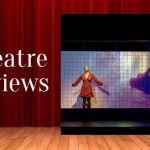 A return to the waterPlay Reviews 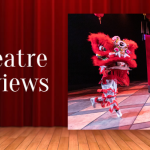 A love letter to a fatherPlay Reviews