Ah, the troubles that bedevil 6-year-olds–learning to fly a kite, playing baseball, falling love with a little red-headed girl. We may laugh, but these are just a few of the issues troubling Charlie Brown and the rest of the Peanuts gang in You’re A Good Man, Charlie Brown. 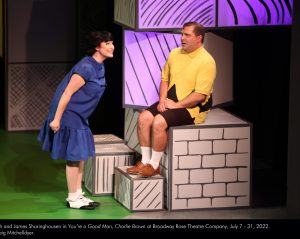 Based on the the comic strip “Peanuts” by Charles M. Schulz, with book, music, and lyrics by Clark Gesner, additional dialogue by Michael Mayer, and additional music and lyrics by Andrew Lippa, You’re A Good Man, Charlie Brown opened to an enthusiastic crowd at Broadway Rose Theatre Company‘s New Stage on July 8.

Charlie Brown (James Sharinghousen) could be King of the World, except, as his friend Lucy Van Pelt (Sarah Aldrich) is quick to point out, he’s “so wishy washy”. He’s also insecure, particularly when it comes to kite flying and eating lunch at school. Lucy is concerned about marriage, and has developed a ridiculous crush on Shroeder (Jason Hays), who happily ignores her for his piano. Linus Van Pelt (Michael Hammerstrom) is the on-stage philosopher, and Sally Brown (Camille Trinka) is obsessed with rabbits.

How does the acting world deal with Snoopy? Kimo Camat has it covered–an incredible dog with an incredible voice and great comic timing! 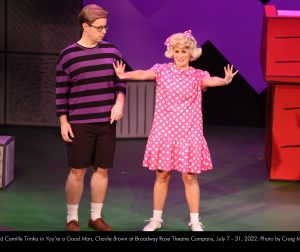 Directed and choreographed by Broadway Rose managing director Dan Murphy with music direction by Darcy White, You’re A Good Man, Charlie Brown presents a series of comic-strip vignettes–a day in Charlie Brown’s life punctuated with lively diversions such as rabbit hunting, a Red Baron adventure, and some sibling rivalries. It’s light and fun, and truly a show for all ages (however, methinks those of us who enjoyed the comic strip growing up will enjoy it most!). 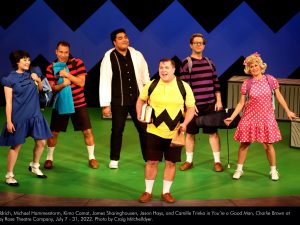 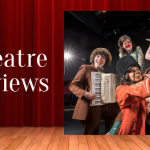 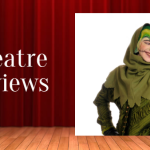 A frog, a rat, and a princessPlay Reviews