“Abundant Acts of Creation” hit stages all over the metropolitan area when the 10th annual Fertile Ground A City-Wide Festival of New Works kicks off on January 24 in venues all over the greater Portland area.

Creating Life Inside is written by justice-involved youth at the Donald E. Long Juvenile Detention Center. It will be presented in workshop by professional actors.

Creating Life Inside is written by justice-involved youth at the Donald E. Long Juvenile Detention Center. It will be presented in workshop by professional actors.

Fertile Ground 2019’s myriad of new works span theatre in long and short form, musical theatre, circus arts, sketch and improvisational comedy, animation, a wide variety of dance disciplines, social action through the arts, as well as the voices of youth, lesser heard voices, and shows that are derived from audience participation or input. In addition to seasoned producers, dozens of emerging young producers, playwrights, choreographers and animators will offer their work in this collaborative Portland showcase festival.

“I am tremendously proud of the new work Fertile Ground has generated over the past 10 years,” said Nicole Lane, Fertile Ground Festival Director. “It is personally gratifying to see such expansive growth and know that Fertile Ground serves the artists and audiences of this community.

Involving hundreds of artists and welcoming thousands of audience members each year, Fertile Ground is a celebration of Portland’s artistic community that gives artists the platform to take chances, share their artistic impulses and cultivate some producing skills, while getting introduced to new audiences. Fertile Ground also helps educate audiences about the process of developing new work, and introduces them to new artists and artistic genres. I hope the festival will continue to grow in its inclusivity – welcoming emerging artists, elevating new voices and generating a wider array of arts-centric offerings, while also inspiring new audiences to take in the work of Portland’s creative community.” 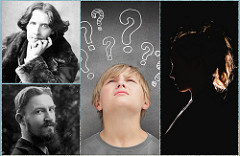 The Autistic Ideal written and directed by Adam Ares, will be presented in workshop.

The 2019 Festival offers a robust lineup of works from regularly producing companies like Echo Theatre Company, Live on Stage, Lakewood Theatre and Theatre Vertigo, along with producing veteran companies like Passin’Art, Many Hats Collaboration, CoHo Productions and CompassWorks, but leans strongly into the work of emerging playwrights and producers offering works-in-progress or World Premiere work like MediaRites’ Theatre Diaspora, Deep End Theater and Fuse Theatre. For FG19, Polaris Dance Theatre will again present the “Groovin’ Greenhouse” with a variety of choreographers and dance groups representing the Portland dance community. PDXPlaywrights will present 10 events comprising new work by 27 playwrights. LineStorm Playwrights will present a host of lunchtime readings at Artists Rep.

The Bad Hour by Karen Polinsky, directed by Nina Monique Kelly, is a fictionalized version of the “hostile takeover of a bird sanctuary in the badlands of Oregon, and will be presented in a staged reading.

At a recent press night, I had the opportunity to interview several of the participants in this year’s event–writers, actors, producers, dancers, and musicians. The creators of these wonderful new works are devoted to their craft and to having their voices heard. Some I remember from previous years. Others were new to me. To get an idea of their level of commitment, I asked several when they first knew they wanted to do what they are doing now. Without missing a beat, most of them said, “When I was six years old.”

Fertile Ground performances are inexpensive, ranging in cost from $5 to $25 per ticket. Festival passes $50 each, cover all shows; however, reservations must be made in advance. Be aware that most of the performances are works in progress, plays for the most part, that are still in various phases of development.