Portland Center Stage’s latest production, Cyrano, brings to the stage a delightful, fresh rendering of Edmond Rostand’s beloved play Cyrano de Bergerac. I first read the play in a long ago literature class and was delighted by the humor, the language, and Cyrano himself–the soulful, romantic French soldier, dramatist and novelist with an oversized proboscis and a heart to match.

The original play has been lovingly adapted by Michael Hollinger and Aaron Posner, and recently enjoyed its world premiere in Washington, D.C. While different in many ways from the original, the spirit of the original play that has so captivated theatre-goers for the past 100 years still remains. It’s sharp, it’s witty, it’s courtly in language and device. There’s even a good sword fight or two. The deftly inserted modern twists elicit gasps of surprise and laughter. Most important, they work.

Cyrano (Andrew McGinn) himself is a character study. Swashbuckling duelist, master of witty repartee, a truly Renaissance man in every way, he also believes in his core that no woman will ever love him because of his overlarge nose. He’s put a lot of thought into that nose, to the point where he can joke about it. In this script, as in the original, he indulges in a monologue of jokes about his nose, not the least being (in the original at least) “Was this the nose that launched a thousand ships?” His jokes take on a heart-wrenching twist when we realize that he is hopelessly smitten by his beautiful distant cousin, Roxane (Jen Taylor).

Roxane adores Cyrano, but does not realize his dilemma as she is smitten with a handsome soldier named Christian (Colin Byrne).  Christian is a “whatever, man” kind of suitor. Despite his cuteness, he needs somebody to tell him what to do. Wanting to insure Roxane’s happiness, Cyrano embarks on an education program with Christian, and takes on the task of writing his love letters to Roxane for him. 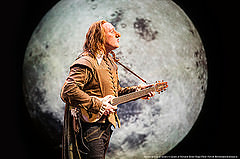 This all works dandy, until Roxane tells Christian she is in love with him because through the letters she has come to love his soul.

It was with sheer delight that I watched this play. Add to the top-flight cast of actors from Portland and Seattle, the fun new script, and guest director Jane Jones, was a great message on the nature of love. Damon Kupper took the stage as Desiree, Roxane’s nurse, harking to the time when men regularly took the part of women on stage. The set by William Bloodgood (most recently designer for Other Desert Cities) was stunning in its simplicity and versatility.

Finally, there really was a French soldier named Cyrano de Bergerac who lived from 1619-1655, who was known for his wordplay and swordsmanship, as well as his nose. His legend made it through the centuries to the first production of Rostand’s play in 1897. This new version should be good for at least another hundred years. Cyrano funs through May 3 at Portland Center Stage.