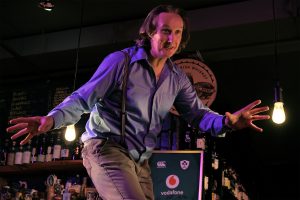 “I consider myself an artist,” says Tim Finnegan (Tom O’Leary) early in Corrib Theatre‘s most recent production The Smuggler. He’s also an out-of-work bartender, a frustrated writer, a husband and father, and an American. “I may not sound like it. But I am.”

Mostly, Finnegan is an outsider. And like so many immigrants to the USA, he’s trying to get his bearings. He’s white. He speaks English. And his wife, Tina, wants a house–even though they can barely pay the rent. On top of that, his in-laws hate him. Why does this have to be so hard?

Ronan Noone‘s brilliant one-man play about an Irish immigrant’s pursuit of the American dream will certainly get the attention of anyone who has moved to another country and attempted to make a go of it. It’s also familiar ground for the playwright, who came from Ireland and now teaches playwriting in the MFA program at Boston Playwrights’ Theatre; to Irish immigrant O’Leary, a well-known Irish television actor and owner of a popular Irish pub in Portland; and to Gemma Whelan, Irish immigrant, the play’s director, and founding artistic director of Corrib Theatre. 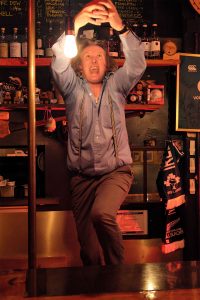 It is when Finnegan meets another immigrant, Mateo, that his fortunes begin to change. He learns to make people “appear and disappear”. And this is where things get really interesting. “It’s a thin line between desperation and acting immorally,” our hero notes. He also acknowledges that there is at least some dignity in criminality. While the three Irish immigrants involved with this production clearly landed on their feet here, for every one of them there are thousands who aren’t so lucky. Human trafficking is a lucrative business.

The Smuggler offers a fascinating and cynical look at our cuture and the price one pays for acceptance from the outsider’s point-of-view. Directed by Whelan, O’Leary gives a deft and physical performance with great comic timing.

A shout out to Gregory Pulver, costume designer; Kelly Terry, lighting desinger; and Colin Herring, stage and production manager.  Performances of The Smuggler continue through May 22 at T.J. O’Leary’s Pub, 2926 NE Alberta St. Portland, OR. Tickets are available here. 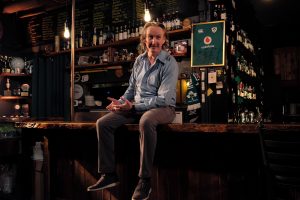 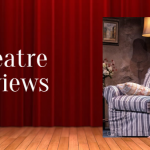 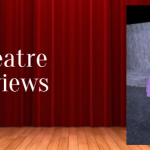 The new kid(s) in townPlay Reviews