The cast of Freestyle Love Supreme.

It’s not every day that a New York touring company can land in Portland and put on a show where the word Willamette is pronounced correctly. But the cast of Freestyle Love Supreme, the innovative, outrageous, and hilarious hip hop conglomerate that currently owns the Mainstage at Portland Center Stage at the Armory, did its homework. It is here to say our words correctly and to entertain. You won’t want to miss it.

Hip hop has always been a mystery to those people of a certain age who spend tons of their disposable income on theatrical events. For those not in the know, Freestyle Love Supreme energetically and ebulliently breaks it down to Hip Hop 101.

“It starts with the beat,” says Jelly Donut (Andrew Bancroft), who along with Richard Baskin, Jr., Jay C. Ellis, Kaila Mullady, Morgan Reilly, James Rushin, Dizzy Senze, Chris Sullivan, and Anthony Veneziale form the cast for Freestyle Love Supreme. Once there is the beat, the cast seeks ideas from the audience to  find the word, the headline, and the story. The magic happens when these talented folks take that word, headline, or story and transform it into a into a rap song. The possibilities prove endless. 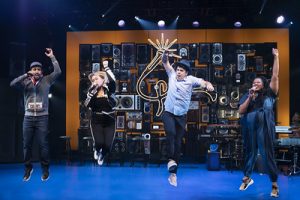 Part of the appeal of the show is the way the cast pokes fun at familiar Oregon icons as part of their comedy material. Each performance depends upon who is in the house that night and what they are willing to share. Watching and participating in this creative process is nothing short of brilliant.

Freestyle Love Supreme has its origins in 2004 — prior to the world premieres of both In the Heights and Hamilton—when the artists developed it during rehearsal breaks for In the Heights while that musical was still in development. It was conceived by Anthony Veneziale and created by Veneziale, Thomas Kail, and Lin-Manual Miranda. The show is directed by Thomas Kail, with scenic design by Beowulf Boritt; costume design, Lisa Zinni; lighting design, Jeff Croiter; sound design, Nevin Steinberg. Music supervisors include Arthur Lewis, Bill Sherman, Chris Sullivan, and Ian Weinberger.

Freestyle Love Supreme continues its run through May 1 at Portland Center Stage at the Armory. It is suitable for audiences age 13 and older. Tickets are available here. 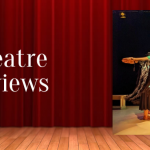 A cry against forgettingPlay Reviews 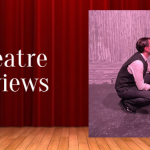 A small town, a doctor, a plaguePlay Reviews