Nellie-Nora (Jamie M. Rea) is the strong one. Cathy (Sasha Belle Neufeld) is a wee bit sick. Mandy (Dainichia Noreault) is a wee bit off. Brigit (Lucy Paschall) is a wee bit angry. Juliet (Wynee Hu) “from the orphanage” is the newbie. These are the women of  a convent laundry at St. Paul’s Home for Penitent Women in Killmacha, Ireland.

Set in 1963, Patricia Burke Brogan‘s 1992 play Eclipsed explores the practice of making pregnant and unwed Irish mothers work as ‘penitents’ in church-run laundries. Supervised by nuns who regarded these women as mindless vessels of evil, the women were treated as virtual slaves and their infants were forcibly put up for adoption. (The movie Philomena starring Judi Dench also addresses this time in Irish history.)

Eclipsed  made its Pacific Northwest premiere at Corrib Theatre last Friday. One of the beauties of the work is that Brogan was herself a novitiate in one of the notorious Magdalene laundries of the time. She witnessed first-hand the brutalities dealt the hapless young women who found themselves in such places. As a result, she decided not to become a nun. 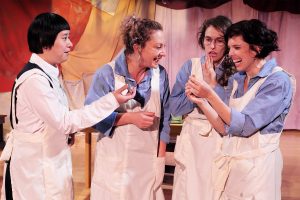 That said, her beautiful play is not all sadness. It’s a play about girls, and Irish girls are quite hilarious. They smoke cigarette stubs found in trouser pockets and mock the system that has damned them. There’s tea time and a pretend wedding and Elvis. Small pleasures. There also are heartbreak, deprivation, shaming, and death. While Sister Virginia (Victoria Alvarez-Chacon) sees the young women as human, Mother Victoria (Lorraine Bahr) does not. The system is straining to the breaking point.

In 1992, Eclipsed was alternately hailed as a groundbreaking play, and as a source of death threats for the playwright. It runs through October 13 at the New Expressive Works stage, 810 SE Belmont, Portland.