In 1834, 14-year-old Afong Moy (Barbie Wu) arrives in New York City from China’s Guangzhou Province. Sold as chattel by her family, she will perform in a museum to paying gawkers. She will be in the United States for two years, she tells us. Rumored to be the first Chinese woman to set foot on American soil, she is certain to draw crowds, all paying 25 cents per adult, 10 cents per child to witness this odd phenomenon.

What could go wrong, you wonder? In Lloyd Suh‘s intimate and moving play The Chinese Lady, Artist Repertory Theatre’s first production since early 2020, there is always the unexpected. Afong has no friends, unless one counts her translator, the ever put-upon Atung (Bern Tan). To others, she is a curiosity with her bound feet, her tea ceremony, and her strange manner of eating with sticks. More of a freak than a human.

Afong is proud of her feet. Feet such as hers are broken and bound during childhood, and develop to the size and shape of large fists. This is a fetish of the Chinese upper class during those times, since women in the lower classes have to be able to get around. “I have noticed that my feet are a source of constant fascination,” Afong muses as she takes a turn around her little Chinese room (like no woman with bound feet walked EVER). And as she walks, she can’t help noticing that some western practices she finds at least as barbaric as foot-binding. “Such as corsets,” she says, ever so  gently. “Or the trans-Atlantic slave trade.”

Two years later Afong is still on display at the museum. Atung continues with his bitching. Afong goes on tour down the Atlantic coastline, the price to see her rises, and she is received by President Andrew Jackson. This does not go well. With more exposure to the American culture, she learns precisely where she fits into her new home–because it is abundantly clear at some point that she will not be returning to China–and what her presence as The Other brings out in most Americans. How she is seen and judged. How she is outnumbered. Her deep loneliness. How she and later Chinese immigrants are used in the American landscape.

Directed by Lava Alapai, Barbie Wu is extraordinary as Afong. Her speech is delicate and modulated to please, her every gesture graceful. She continues to smile as she visibly ages before us. And yet, with each year, the content of her speech changes as reality dawns. Irony creeps in, and with it a grim acceptance.

Scenic and costume designer Sara Ryung Clement creates a stunning set, “the Chinese room”, a regal platform with Chinese art and artifacts, and lush peonies echoing the beauty and colors of Afong’s elaborate costumes. Among the paper lanterns, Afong describes it as “a room unlike any in China”. She is as surprised by her surroundings as the gawkers are of her. 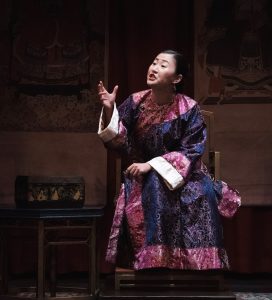