It’s a dark and stormy night when Brad (Colin Stephen Kane) and Janet (Christine Greenhalgh) set out to visit a former professor, Dr. Scott (Brian Burger), and announce their engagement. As things tend to happen on such nights, the young couple become stranded when the front driver’s side tire on Brad’s car gives up the ghost.

Thus begins The Rocky Horror Show at Lakewood Theatre, and the most memorable night in the lives of this heretofore normal, all-American pair. After trudging through the rainstorm they see a light in the distance and arrive on a doorstep in hope of using the telephone. Once through the door, every semblance of normal disappears.

This cult musical comedy, with book, music, and lyrics by Richard O’Brien, was conceived when O’Brien was an out-of-work actor in London. Based on the sci-fi and horror films of the 1930s, it premiered at London’s West End in 1973, and by 1975 had been made into a musical horror comedy film.

Dr. Frank’N’Furter (Norman Wilson), into whose castle the hapless couple have stumbled, is a mad scientist. He introduces himself by stalking down an open staircase like a great Praying Mantis, all long  arms and legs, feathers and pearls, huge red lips, and impossibly high  heels. He then introduces Rocky Horror (Cade Holbrook), an artificially made, fully grown, physically perfect muscle man in a gold lame Speedo, complete “with blond hair and a tan”.

As the night progresses, things in the creepy old castle just get crazier. At times, the Narrators (Lisa Knox and Richard Warren) step in to clarify. Meanwhile, the Doctor and his assistants Riff Raff (Alec Cameron Lugo), Magenta (Paige A. Hanna), and Columbia (Michaela George) push the boundaries of empowerment, self-creation, and openness to all sexual orientations in what was, at the time, a futuristic vision of an accepting sexual revolution, complete with laugh-out-loud moments and witty songs. 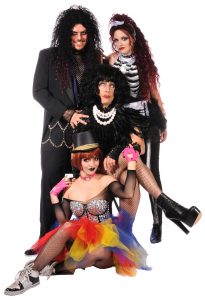 It is small wonder this show became a cult favorite back in the day–it still is. It runs through October 13 at Lakewood Center for the Performing Arts. Audience members are encouraged to dress in costume, sing along, dance along, and shine their lights through the stormy night!

(It is worth mentioning that the Rocky Horror Picture Show continues its 39 years of absolute pleasure at the Clinton Street Theater.)