Gloria (Foss Curtis) is the office outcast. Every office has one. In Profile Theatre‘s production of the Branden Jacobs-Jenkins play Gloria, the title character periodically schlumps through the editorial assistants office in attire more appropriate to a homeless person than a member of the team. Or any team, for that matter.

Every schlump silences the gossip because, let’s face it, much of the gossip is about Gloria. She had a housewarming party the night before. The only person from this toxic little gang that showed up was Dean (Nick Ferrucci), who got so drunk he can’t remember what happened.

Nan (Foss Curtis) is a voice from a glassed off supervisor’s office. Kendra (Akari Jensen) spends her time bringing Ani (Brenan Dwyer) up to date on what’s what–when she’s not on social media or making a trip to Starbuck’s. Lorin (John San Nicolas) pops in regularly to tell everyone to “shut the f— up!” Miles the intern (Gerrin Mitchell) wears headphones and minds his own business except when Dean sends him off on small, ridiculous errands.

And then the unthinkable happens.

It happens so fast, so unexpectedly, so graphically that the audience is a part of it. 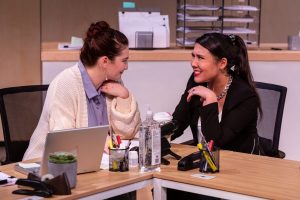 Branden Jacobs-Jenkins has crafted a searing and mordantly funny play that pokes into the cracks and crevices of today’s work culture with serious purpose. In this fictional, upwardly mobile, magazine publishing milieu, backstabbing is the means to that end. Everybody wants a book deal, so when the unthinkable happens, their small world explodes over who owns the story.

For this playwright, nothing is off the table. There’s the ambition, social media, workplace toxicity, workplace violence, trauma, and racism, both overt and not-so. The audience is allowed to laugh at Jenkins’s political incorrectness because it is purposeful and he has earned his place at the table. And laugh we do, when we’re not gasping with shock.

Gloria was a finalist for the Pulitzer Prize, as was his morality play Everybody (produced at Artists Repertory Theatre in 2018). As one of this country’s brightest young playwrights, Jenkins has repeatedly shown the ability to conflate myriad social issues into succinct pieces of work. He can bounce between genres, from morality play to 19th century melodrama to the modern workplace and never trip on the message. He can push the limits of “normal” and yet allow the humanity of his characters to shine through. He is in all ways a theatrical force, and when that Pulitzer comes it will be well-deserved.

Gloria runs Wednesdays through Sundays at the Imago Theatre venue, 17 SE 8th, Portland. Content is suitable for ages 16 and up. All pandemic safety protocols are in place, and audience members must wear masks and present vaccine certification at the door. Tickets are available here. 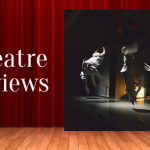