Damon Runyon was one of those hard-living, gritty newspaper reporters of the 1920s and ’30s who liked to get his hands dirty. As a short story writer, he fictionalized some of the colorful characters he met on the streets of New York City. In his stories, gave them memorable monikers–Harry the Horse, Big Jule, Good Time Charley, Nathan Detroit–and distinctive ways of speaking that endeared them to his readers. 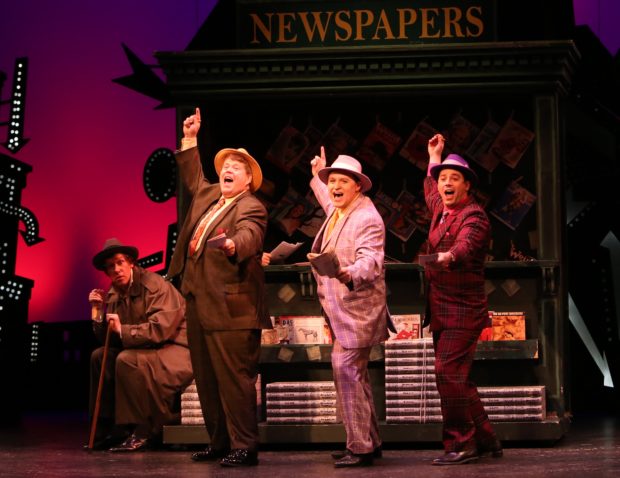 In 1950, Guys and Dolls, based on two of Runyon’s popular short stories, premiered on Broadway. It won the Tony Award for Best Musical and just missed winning the 1951 Pulitzer Prize. One of its writers, Abe Burrows, was then under investigation by the House of Un-American Activities, and Columbia University decided not to award the prize that year.

This brassy, rollicking musical comedy involves lovable gangsters, earnest, soul-saving missionaries, romantic entanglements, and ridiculous goings on. Think “I Love Lucy” in Times Square! Co-written by Jo Swerling and Abe Burrows, with music and lyrics by Frank Loesser, the show is directed by Sharon Maroney with musical direction by Jeffrey Childs and choreography by Maria Tucker.

Costumes, designed by Ryan J. Moller, with additional pieces by Brynne Oster-Bainnson, add to the fun, with their bright colors for Ms. Sahler and female ensemble members, and an astounding array of plaid suits for the men. The set, reminiscent of Times Square, was provided by the Music and Theatre Company.

Guys and Dolls is a delightfully dated musical that transports the audience to a different time and attitude for New York City. Cast and music are excellent, and there are laughs galore. It plays at the Deb Fennel Auditorium through August 19, and is suitable for families with children ages 6 and up.

Annie–for the kid in youPlay Reviews