Peggy Ingram (Ruth Jenkins) is dead. As her sister, Sissy Hickey (Ravyn Jazper-Hawke) tells it, this upstanding member of the community died in disgrace when she tripped over the wooden legs of her lover G.W. (Ted Hatsook) in a seedy motel. The family–indeed, the whole dang town–is in an uproar.

Welcome to Winters, Texas, birthplace and childhood home of playwright, actor, film director and producer Del Shores, who has mined his boyhood memories to great effect. His play Sordid Lives is onstage now at the Twilight Theater Company. Directed by Meghan Daaboul, the play is set during the two days following Grandma Peggy’s death.

In a place where everyone thought they knew everyone else’s business, there is much to discuss. Several women gather in Sissy’s living room–including G.W.’s wife “My husband killed your sister” Noleta (Crystal Lemons), “I don’t want to hear the truth” Latrell (Christie Quinn), and LaVonda (Deone Jennings)–to eat pie, pop pills, and bemoan the scandal.

Meanwhile, at a nearby bar, the men–G.W., Wardell (Case Faubs), and Odell   (Jonathan Wexler)–tell local tales from their perspective. It is here we learn that Peggy has a son, Brother Boy (John Kileen), who channels Tammy Wynette. 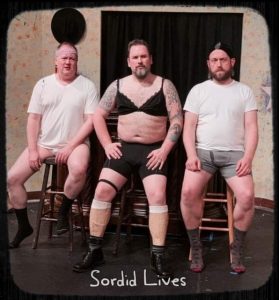 Peggy’s grandson Ty (Jonathan Miles) begins each “chapter” of the play with a soliloquy from the safety of his therapist’s office in New York City. Ty was the smart one. Like his creator Mr. Shores, he got away. And just when you think it can’t get any weirder, Dr. Eve Bollinger (Meghan Daaboul) makes her entrance. Local musician Brie Ellis as Bitsy Mae Harling introduces play segments with the country song, “Sordid Lives”.

Outrageously funny, gossipy, and crass, Sordid Lives stretches familiar Texas stereotypes to the limit. However, both Ty and his uncle Brother Boy also have stories to tell. Their histories are not so amusing; thus, they reset the play from ridiculous to poignant. 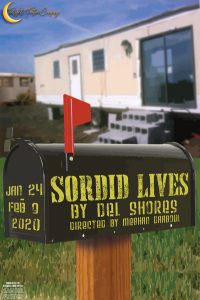