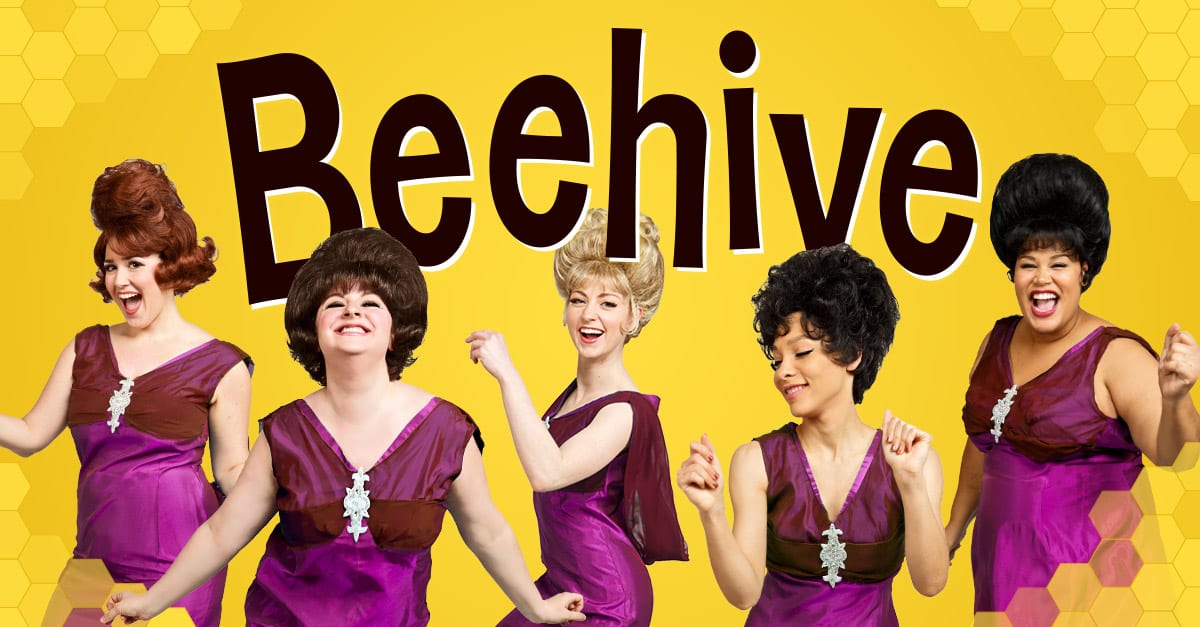 Those lonesome teenage years in the 1960s were pretty brutal. Especially for females. For those who can’t remember those special times, there’s the music. And Beehive, a lively musical review of the girl music of the 1960s, now playing at Tigard’s Broadway Rose Theatre.

One of the most iconic symbols of the 1960s was the female hairdo. Ancient torture devices were revived and given new life in order that women–mostly younger women–could make themselves more attractive to males by creating massive sculpted things on the tops of their heads. Somewhere there must be a museum devoted to these oddities. The correct Beehive hairdo (see above) required hours, if not days, of planning–attaching said ancient torture devices to one’s head and trying to sleep, followed by mornings of teasing, fluffing, shaping, combing over, and shellacking with Aqua Net!

Who could have dreamed that a nod to such nonsense could be so very entertaining? Fasten your seatbelts!

Directed by Sharon Maroney, Beehive was created in the mid-1980s by the late Larry Gallagher, and features six amazing singers and nearly 40 tunes. Alyssa Birrer guides the audience chronologically from the maze of early girl groups (the Chiffons, the Shirelles, The Supremes) and soloists (Leslie Gore, Brenda Lee, Petula Clark, Janis Ian, Janis Joplin and Aretha). Songs feature solos and various combinations of the six fabulous singers in the show, including Birrer, Kristen Calvin, Antonia Darlene, Kayla Dixon, Andrea Enright, and Malia Tippets, all of whom are blessed with voices that fit the various stars they emulate. Enright, for example, is an amazing Leslie Gore, while Darlene channels Aretha Franklin as if she were the real deal, and Kayla Dixon rocks it as Tina Turner.

By the late 1960s, that era of fake innocence was a thing of the past. Beehive hair styles gave way to free-flowing hair, tight bell-bottom jeans, and a different mood. Politics and social justice took center stage, and young women had bigger fish to fry than somebody’s boyfriend being back and who was going to get in trouble.

Beehive, the musical, charts these changes through the artists and songs of a turbulent decade, and the Broadway Rose production does the musical proud. It is performed at Broadway Rose’s New Stage, 12850 SW Grant Avenue, Tigard, through May 14. A special shout out to Jeffrey Childs and the band, to wig mistress Jane Holmes, and to costume designer Brynne Oster-Bainnson.