A virus plagues the country, in Alan Browne’s play Beirut, produced by Beirut in PDX, LLC.  It spreads through the exchange of bodily fluids, and there is no cure. So the government has stepped in and placed those who test positive in quarantine. Beirut is the fictional neighborhood in lower Manhattan where the infected are sent to die. Meanwhile, to prevent contagion among whose who may be infected and not know it, everyone else is forbidden to have sex. Those not in quarantine wander about in burlap sacks, and government cameras are everywhere.

That does not stop Blue (Mamie Colombero) from sneaking into the place where her boyfriend Torch(Joshua J. Weinstein) is confined. He’s tested positive, and has a P tattooed on his left buttock to prove it. Blue has had enough of government interference, thank you very much, and has decided to cast her lot with Torch and eat out of cans in his filthy hovel. But she wants to have sex with him, and he refuses because it would endanger her. The fighting begins.

This is not just a play about sex, although that is what most of the arguing is about. Rather, it is a play about communication, connection, problem solving, circumstances, choices, and ultimately what is worth dying for. With its nudity, violence, intrusive searches, and language, Beirut will make your hair stand on end. 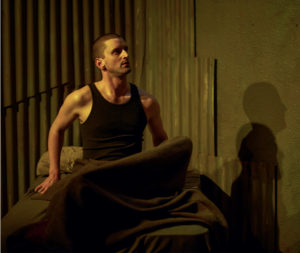 It’s a rude and uncomfortable play. And yet, directed by Andrea White, Colombero and Weinstein produce an incredible chemistry, interrupted briefly by the menacing and terrifying Guard (Caleb Sohigian). Their connection is so sizzling and vital and volatile, one cannot help but be drawn into the action. Blue’s arguments for diving into life, no matter the consequences, endear her to Torch as they anger and terrify him.

Alan Browne’s play was written in 1989 in response to the HIV/AIDS epidemic. Unfortunately, the playwright died of complications from AIDS before he saw Beirut produced. The virus in the play is not named, and the couple is heterosexual, perhaps to make its message more universal. It confronts the issues of willful ignorance, blame, violence and disrespect for those affected by the virus, ostracization, and isolation. No empathy is shown the characters in this play, except what they show each other. 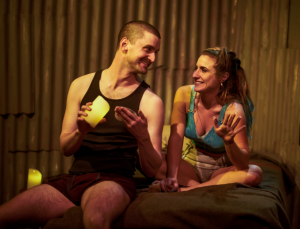