Broadway Rose Theatre Company has kicked off the holiday season with its original musical It Happened One Christmas. Written, directed, and choreographed by Broadway Rose Managing Director Dan Murphy, the show is a revue of Christmas songs–some old, some new, some traditional, and some you’ve never heard of–fashioned around a simple story line.

Who knows what happens in Grimble’s Department Store’s Santa Land after the lights go out and the shoppers have all gone home. The tree lights up, and mannequins come to life, singing and dancing their way through this colorful and festive musical revue featuring Chad Craner, Colin Stephen Kane, Jalena Scott, and Megan Tudor.

Walter (Fred Bishop), the night security person, has worked at Grimble’s for 39 years. He’s widowed now, and is apt to be a bit nostalgic. When he bumps into Frances (Jennifer Goldsmith), another longtime Grimble’s employee who cleans at night, both wax nostalgic through dialog and song about the good times now behind them. There’s coffee involved. And, as we move into the second act, there may even be more than friendship. But I don’t want to give anything away!

Fred Bishop and Jennifer Goldsmith in It Happened One Christmas at Broadway Rose. Sam Ortega photo.

This is a show filled with great singing, lighthearted fun, and sweet sentiment that is suitable for ages 9 to 90. Co-writer Rick Lewis arranged the music, with music direction by Jeffrey Childs, scenic design by Kristeen Willis, costumes by Annie Kaiser, lighting design by Phil McBeth, sound design by Brian Karl Moen, and properties design by Liz Carlson and Jeff Duncan. Jeff Duncan is production manager, Jessica Junor is stage manager, and Phil McBeth is technical director.

You can catch It Happened One Christmas at the Broadway Rose New Theatre, 12850 SW Grant Avenue, Tigard 97223 through December 22.

The road to HellPlay Reviews 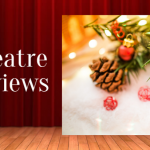