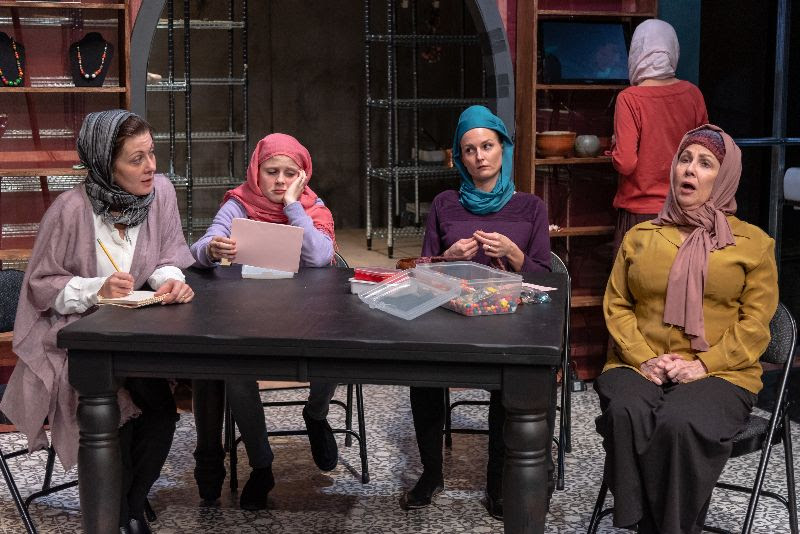 How do the survivors of such an event go on after living through such horror? No Candy, a play by Emma Stanton that enjoyed it’s world premiere at Portland Playhouse last weekend, deals with the aftermath of the Srebrenica genocide.

The play opens 10 years after the massacre. The women have returned to Srebrenica, where Fazila (Val Landrum) has opened a small crafts shop. Fazila and three of her friends–Zlata (Mia Zara), Uma (Sharonlee McLean), Olena (Nikki Weaver), along with Fazila’s teenage daughter Asja (Agatha Olson)–are readying the shop for a celebration of the new Srebrenica Genocide Memorial, an event which hopefully will bring them business from tourists.

The woman work together, tease, laugh, create, and argue. At some level life seems normal, but there are ghosts–symbolized by the wandering spirit of Oric (Ben Newman), Fazila’s husband who was killed in the massacre. Fazila can see him, as can her daughter. Asja, who is almost too young to remember the war, not only can see her father, but like the older women, bears the collective memory of past events.

Mia Zara in No Candy at Portland Playhouse. Photo by Brud Giles.

Amidst the grim memories, there is much hope and even humor in this play. Maja (Jessica Hillenbrand), a non-practicing Muslim, breathes fresh life into the story, and shows Asja another side of life. Zlata shares her wonderful voice. Together the survivors piece together new lives through their artistic works.

Tea Alagic directs this gripping, gut-wrenching play. What war takes away can never be replaced. But while its survivors may be hardened by it, the women of Srebrenica are here depicted as strong but soft enough and hopeful enough to adapt, accept, and begin to move ahead with what life has to offer.

Of special mention, Croatian actor Mia Zara came to Portland to appear in this world premiere. A child during the Bosnian War, she recently shared her memories on OPB’s Think Out Loud. Bosnian-born artist Sejla Kameric created the play’s haunting poster.

No Candy runs through February 10 at Portland Playhouse, and is suitable for high school students and up.