We’re in a pub. A Scottish pub. Here’s your food. The bar is over there. Big, round tables. Gobs of jolly people. Fine, energizing, Scottish music provided by Katie Jane Lubiens and Adam Easley. And then, we meet Prudencia Hart (Amy Newman), happily motoring through the snowdrifts to a conference in the Scottish Border area of Scotland where she will deliver her PhD. dissertation theory on Hell as it is interpreted in the Border area traditional ballads. 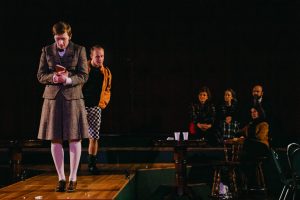 If this sounds boring, David Greig‘s The Strange Undoing of Prudencia Hart, as interpreted by Artists Repertory Theatre, is anything but boring. Directed by Luan Schooler and Damaso Rodriguez, this may prove to be the wildest theatrical ride of your life!

Scorned by her colleague Colin (Eric Little), Prudencia plans to leave town. Alas, a mighty snowstorm has struck, and she is dragged to the pub by Colin for the ceilidh (kay-lee) that celebrates the Winter Solstice. (This also is called the Devil’s Ceilidh, the night when the Devil grabs some innocent celebrant and drags him or her to Hell.)

Luisa Sermol as one of the Flaming Sambucas. Kathleen Kelly photo.

The ceilidh goes on too long, and features a performance from the Flaming Sambucas, which none of us will ever forget. When Prudencia has had more than enough, she escapes into the blizzard to find a lovely B&B in which to spend the night. A B&B owned by a fellow named Nick (Darius Pierce).

It’s a fascinating play, and there’s a lot to sort out–particularly as the story is told in rhymed couplets with a Scottish brogue. Fortunately, Reed College Professor Pancho Savery has written a summary of the  play that theatre-goers can read while they dine on pub fare. The summary is required reading, as it makes sense of everything. In addition to being an evening of madcap entertainment, The Strange Undoing of Prudencia Hart is a large-scale literary achievement, bringing to the fore the traditional stories of the Border area as researched and written about by Robert Burns and Sir Walter Scott, in an entertaining format.

“I first encountered The Strange Undoing of Prudencia Hart in 2013, when the National Theatre of Scotland brought the show to the PuSh Festival in Vancouver, and I have wanted to do it ever since,” says Director of New Play Development & Dramaturgy and co-director of the play, Luan Schooler. “The show is part ballad, part ghost story, part myth, and part rom-com. In some ways, Prudencia Hart is like a Mobius strip, playfully turning reality and unreality into the other and back again.” 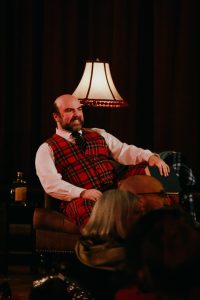 “It’s rare for a playwright to so generously trust a company to make the play their own,” says Artistic Director and co-director of the play, Dámaso Rodríguez. “On the page, Greig’s play takes the form of endlessly clever verse in mostly rhyming couplets. There’s no punctuation, no casting breakdown, and very few songs specified in the text. Nearly every production choice from cast size, to the score, to assignment of dialogue is left up to the team telling the story. In that spirit, we began the unique journey of bringing Portland’s own version of the supernatural Scottish ballad to life.”

In addition to the three characters, there are Chorus A (Susannah Mars), Chorus B (Luisa Sermol), the musicians, and ensemble (Rachel Bentzen, Kerie Darner, Corey Silver, Haley Stone, and Alicia Hueni). 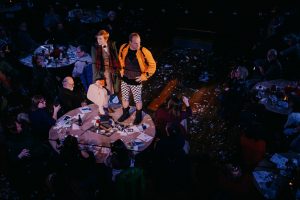 The cast and musicians of The Strange Undoing of Prudencia Hart perform scenes in and around audience members seated in pub-style tables and mingle with willing participants. Those who wish may order a pub-grub meal along with their tickets to enhance the pub-like ambience. (At last check, haggis was not available.)

The play runs through January 5 at the Tiffany Center, 1410 SW Morrison, Portland, in the 4th floor ballroom. 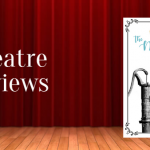