When Martha Washington (Melanie Moseley) appears bound and gagged with an apple, in her own kitchen, a mere few days after the death of her husband and our first President George Washington, one’s first reaction is disbelief.

When Martha spits out said apple and groans, “I can’t breathe,” one realizes that this is not the usual historical fiction event.

Indeed, the world premiere of Don Wilson Glenn‘s new play Martha Bakes: a Biography of a Revolution and Insurrection that never happened is a brilliant and cutting satire set at the Washingtons’ Mount Vernon estate in December of 1799. It is a production of The Vanport Mosaic in co-production with CoHo Productions, and is directed by Damaris Webb.

While the story line is set at the dawn of our nation, its ramifications are as recent as today’s headlines. Women had little power, slaves had considerably less, and somehow people thought that system of injustice was sustainable. Washington’s slaves are angry. There is a well-known rumor circulating that George intends to free his slaves after his death. But his will has caveats. The slaves stay until Martha dies. And insurrection or not, Martha has no intention of letting anyone go anywhere!

So great is her denial of this unacceptable situation that she pivots into cooking. What follows is a hilarious riff on Martha Stewart. As she demonstrates the assembly of a nice soda bread, Martha tells us her side of the slave issue. It turns out she was 25 when her first husband, Daniel Parke Custis died, leaving her very wealthy indeed. She brought money and 84 slaves to her marriage to George as dower property, and by her estimates th0se slaves and their progeny comprise the majority of the 300-plus enslaved souls at Mount Vernon. They are hers, most of them, and  George’s will has nothing to do with it. 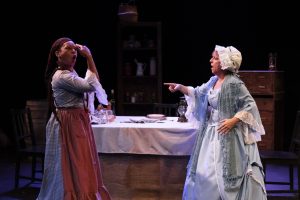 And then a chicken appears. And shortly after that, Martha’s personal slave Ona Marie Judge (Victoria Alvarez-Chacon), a runaway dower slave, steps onstage and and the fur really begins to fly. For Ona has her own story and her own demands, and they don’t line up with Martha’s.

How I wish Martha Bakes had a longer run! This is a fabulous play on many levels, a mature work by a mature playwright, with so much to say about where we’ve been and where we are today. While the laughs never stop, Martha Bakes contains enough accurate historical information to make its message clear and credible. I submit that it would be a great teaching tool if taken to local schools.