In June, on a whim, a dear friend and I took a day trip to Eugene Oregon. We both are University of Oregon grads and have been known to bleed green during football season. But more than the U of O, what intrigued me as our day evolved was a trip down memory lane to the year after I earned my degree. 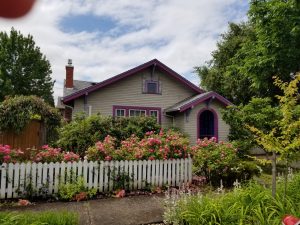 I can count on one hand the times I’ve spent more than an hour in Eugene since April 1, 1972. However, once in downtown, my car seemed to gravitate, without any encouragement from me, to West Broadway. I humored myself as we continued west under a canopy of large trees. The trees are much larger after 51 years, but under them it was the same old, mostly blue collar houses. Same shitty 1960s-era apartment It was so familiar and yet so foreign. I wondered aloud if the house would still be there.

We crossed Chambers, where Tandra’s three-legged dog Rags was killed by a car. Feeling a bit light-headed, I slowed the car until we were creeping along. And there it was: 1736 W. Broadway. The house where I lived during my days as managing editor of an alternative monthly magazine called Bullfrog Information Service.

The house wasn’t glamorous. In those days there was no cute picket fence, no flowers, and no lawn to speak of. The house was painted a dingy blue. We had a small garden that provided zuchinni, chard, and tomatoes. Lauri had a cat who peed on everything and produced a litter of kittens. There were three bedrooms, a working kitchen, a little room that would have held a washing machine if we’d had one, and a bathroom. I’m not certain the place had a foundation. The heating was horrible and inadequate. 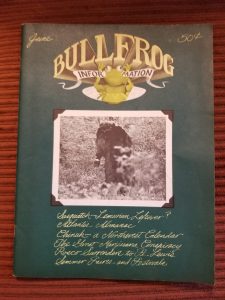 When I moved into the house in December, 1971. my head full of Tom Wolfe, Richard Brautigan and Raymond Mungo, I had two female roommates. Lauri and Michelle cooked Sunday suppers and invited guests. Lauri was a man eater, Michelle was studying architecture. I had a job I hated selling advertising for a local newspaper. Our idyll changed rather quickly when I quit the newspaper job to join the staff at Bullfrog. The roommates hosted a party to celebrate my liberation, all the frogs were invited, and then things got wild.

About a week later, I fell in love with Bullfrog’s publisher, Rick. A couple weeks after that he moved from the art director’s house to ours, having worn out his welcome there. The roommates were not amused. In August, Andy joined Bullfrog as staff photographer and he and his girlfriend Stephanie came out from Ohio. She continued on to Berkeley. When his housing situation deteriorated a couple weeks later, he moved into the house. Somewhere during that time, my original roommates, feeling squeezed, made living arrangements elsewhere.

Then Tandra moved in. With Rags the three-legged dog. I don’t remember where she slept because all the bedrooms were taken. Rags regularly crapped in the house. Then Judy showed up from Manhattan and camped in the washing machine room. I kicked Rick out and threw all his clothes into the trash. Then Andy’s friend Moose came to visit and I fell in love with him. About that time, David, the editor, christened our house Apartment 3-G after a soap opera comic strip popular at the time.

There never was a moment without drama. And there were drugs. Lots of drugs. People showed up with them at our office. They were all over Eugene. Somehow I avoided most of them, mostly due to lack of interest. There was too much work to be done in getting out a magazine.

In October Andy decided to hop a freight train to Berkeley to visit Stephanie. I decided to go with him because I wanted to see my true love, Moose (who had no idea–none–that he was my true love, and in fact and without my permission was already in love with someone else). Jeff, the art director, and his girlfriend Susan joined us on that adventure, and I’m happy to say we all made it safely to Davis, and from there to Berkeley.

These are merely a few of the memories that bubbled up on that innocent day trip to Eugene. The downtown is basically unchanged in 51 years except for a newer upscale area on 5th Avenue abutting Skinner’s Butte. The pedestrian mall is gone. The Brass Rail where Andy and I drank our lunches during the Bullfrog days is now a professional office of some kind. The campus is huge. I presume that most of Eugene’s commerce has moved south to the ‘burbs.

In those days we ate, slept, and breathed Bullfrog. Back then it meant everything to me. But it’s of no consequence today. Of the people I worked with on a daily basis, most are dead now, many victims of their own terrible choices. I lived through it and it helped to mold me into who I am today. It was the best and worst of times.