It’s a madcap scene in 1593 London! The feckless Hugh Pennyman (Grant Byington) literally has his feet to the fire. Young and penniless, Will Shakespeare (Murri Lazeroff-Babin) is a playwright without a play and is plagued by a bad case of writer’s block. Across town, wealthy merchant’s daughter, Viola de Lesseps (Kelsey Glasser), is about to be bartered into a loveless marriage to the arrogant Duke of Wessex (Alec Cameron Lugo) in exchange for a title. Christopher Marlowe (Murren Kennedy) alternately torments Will and feeds him lines.

Lee Hall‘s fast and furious adaptation of the Tom Stoppard/Marc Norman romantic comedy Shakespeare in Love (a 1998 Oscar-winning film) comes to the Lakewood Theatre Company’s Headlee Mainstage in full Renaissance flourish. There are many nods to the Bard throughout the play, including the recurring Shakespeare motif of mistaken identity, the quandry of Marlowe in Shakespeare’s life, and  many beautiful lines from Romeo and Juliet.

Viola craves access to the theatre. As it is illegal for women to appear on stage, she disguises herself as a boy to gain a role in Will Shakespeare’s upcoming (and still unwritten) play. She immediately is cast in the production. When Will discovers his Romeo is a she, he is smitten. The results, as one character declares, are “insurmountable obstacles on the way to disaster”.

Things are arguably worse backstage. Producers joust for the rights to Will’s new play, actors quarrel over roles and muff their lines, and there’s a last-minute change of theatre venue. It’s a mystery how things all manage to come together amid so much laughter, intrigue, and passion. But isn’t that the story of all theatrical productions, not to mention love stories? 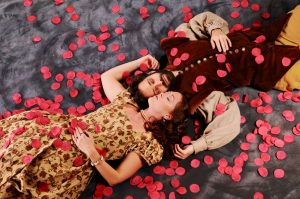 Kelsey Glasser and Murri Lazaroff-Babin in Shakespeare in Love. Photo by Triumph Photography.

Kelsey Glasser as Viola in Shakespeare in Love. Photo by Triumph Photography.

The show continues through December 8 at Lakewood Center. 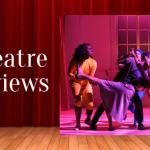