Okay, call me a sucker. I’m a sucker for Christmas stories. Not the ones we see on the Hallmark channel, but real Christmas stories–like that poor couple who travel to Bethlehem to pay their taxes and end up crashing in a stable, and Charles Dickens’s A Christmas Carol in its many iterations.

Charles Leggett as Scrooge and Cycerli Ash as the Ghost of Christmas Past in Portland Playhouse’s A Christmas Carol. Photo by Reina Solunaya.

Portland Playhouse has presented A Christmas Carol for six years, and its staging of this classic story of a miser, ghosts, and spiritual awakening has taken on its own personality. Every production is different and special, overflowing with great characters, original music, and the theatre’s wonderful energy.

And then there are the children–hordes of them–all where they are supposed to be, and delivering their performances with gusto. Of special note, two young actors play Tiny Tim–Margot Weaver, whom I saw in the role last year (excellent), and Victor Wells. There is something particularly poignant about a young man with a disability playing a young man with a disability. Victor rocked it!

Victor Wells as Tiny Tim, with the cast of A Christmas Carol. Photo by Reina Solunaya.

Performances of A Christmas Carol run through December 29 at Portland Playhouse, 602 NE Prescott, Portland. It’s a grand event for playgoers of all ages! 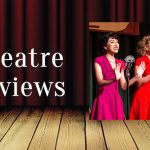