Dominique Francis as Howie in Speech and Debate.

High school senior Howie (Dominique Francis) lies on a bed in his spartan room texting with an older man about hooking up. We can see the entire encounter on a huge mobile device forming the stage backdrop. It’s creepy. Very. Creepy.

In his classroom at a Salem, Oregon high school, Solomon (Max Powell) argues with his teacher (Georgia Ketchmark) about his next contribution to the school newspaper. Solomon is the nerdy but ambitious sort (read, pesky), and he wants to investigate Salem’s homophobic mayor who is caught in a sex scandal involving teenage boys. The teacher attempts to pivot him into more high school-appropriate topics, like the new Speech and Debate Club. Solomon becomes outraged that he and his peers are treated like they are still in primary school.

Meanwhile, Diwata (Gayle Hammersley) sings off-key in her bedroom as she drinks illicit booze and conducts an aggressive e-campaign against a teacher, Mr. Healy, whom she says is molesting her male peers. At least one particular male peer. Not only that, this aspiring actress, who carries an inflated notion of her own abilities, has not been cast in the school play. And probably never will be.

Gayle Hammersley as Diwata in Speech and Debate.

Such is the setup for Stephen Karam‘s Speech and Debate now onstage at Twilight Theater Company.

In Puritanical Salem, these three outliers discover that their laments have a common theme–a piece of the same scandalous puzzle that no one is talking about. Each has a story to share about Mr. Healy.

How is it that teens can smell hypocrisy just like that? Is it because there is so much of it around? Teachers treating them like babies? People with power getting away with pedophilia? As they make more noise, a Portland reporter (Katie Prentiss-Sack) comes to tell their story. That, too, takes a hypocritical turn.

So, despite their differences and their initial disdain for each other, the three teens form an unlikely alliance to expose the truth. Directed by Jeremy Abe, Tony Award-winner Stephen Karam’s Speech and Debate is a dark, sarcastic, yet sincere comedy. It’s an emotional story of misfit teens who explore who they are and what is their personal power as they deal with disinterest and dismissal from the adult world. The first act languishes as the plot reeks of whiny teenage angst. As more issues come to light in the second act, the pace quickens and becomes edgier.

Dominique Francis and Max Powell in Speech and Debate. 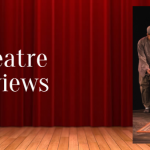