Portland is blessed with so many fine small theatre companies. Theatre Vertigo is just one of those that offers quirky low-budget productions that surprise and delight. Sometimes all it takes is a few unmatched sheets. And yet, so much can happen. 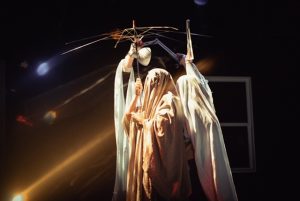 Ghost notices that Ronnie has a cute boyfriend, John Pierre (London Bauman). And then Ronnie gets sassy with her mom and is grounded. A lipstick is involved, as well as a deep conversation in a canoe. Mayhem ensues. Spoilers will not be shared at this time.

Stupid Ghost is a short show, running about 60 minutes. It’s funny and clever, and ultimately creepy. Other characters are the Poltergeist (Tom Mounsey) and Lecturer (Adriana Gantzer). 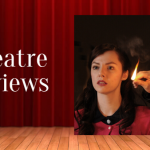