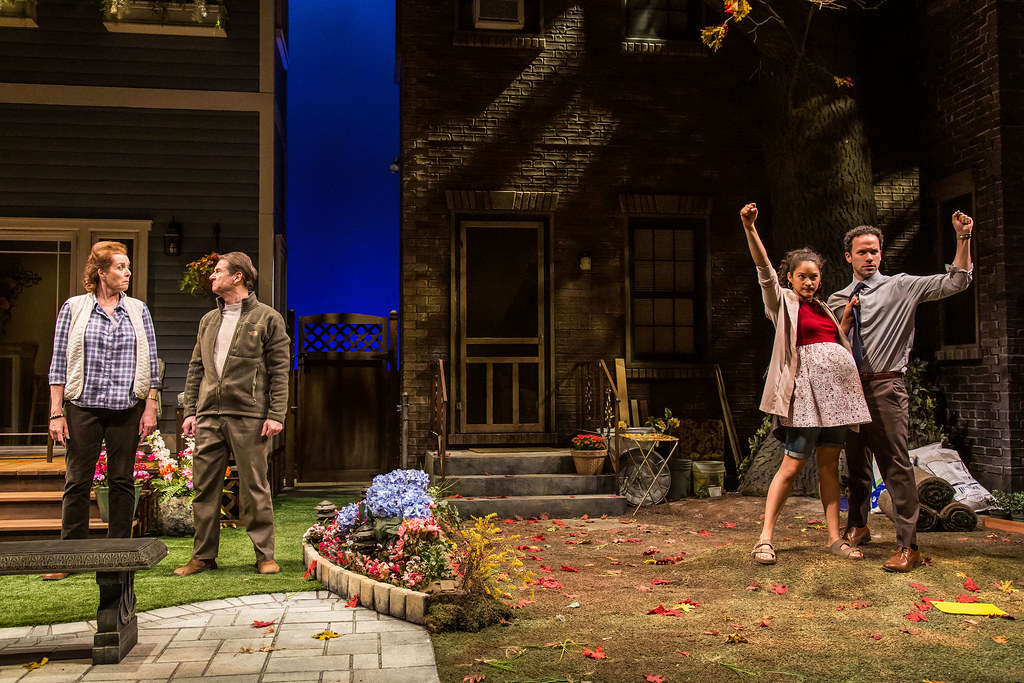 Just when you’re one headline away from throwing in the towel, a beautiful new comedy hits the Main Stage at Portland Center Stage at the Armory. Karen Zacarias‘s  Native Gardens is that play.

Directed by Melissa Crespo, this is a light-hearted comedy about a couple who want to build a wall.

Pablo (Erick Gonzalez) and Tania (Monica Rae Summers Gonzalez) Del Valle have just moved into their dream home in a solidly affluent neighborhood in Washington, D.C. Tania, so pregnant she can’t see her toes, is completing her Ph.D. in anthropology. She’s at the nesting stage in her pregnancy, and therefore a dangerous woman. She’s over the moon about the garden and plans to fill it with native plants. Pablo, newly hired at a prestigious law firm, has invited all of his associates to a backyard barbecue. 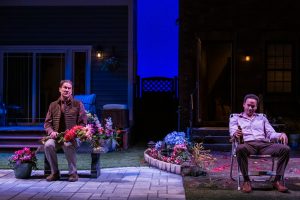 Next door neighbors, Virginia (Anne-Marie Cusson) and Frank (Paul DeBoy) Butley arrive with wine and chocolate. Their garden is anything but native. Frank hopes to win his garden club’s prize for his beautiful, Monsanto-enhanced English landscape. When Tania mentions her native garden plans, his response is, “You’re going to plant weeds on purpose?”

Differences in perspective pop up like spring crocuses in this initial meet-and-greet, and one can readily anticipate a problem or two on the horizon. So Pablo and Tania decide to erect a nice fence. It will allow privacy for the barbecue and keep Monsanto out of their space. The only problem is the property line. It is not where everyone thought it was, and more than two feet of the Butleys’ English garden are on Del Valle soil.

When Frank’s garden is threatened, good intentions quickly devolve into bad manners. Insults regarding taste, privilege, “Colonial plants”, and class fly back and forth across the property line, to the abject horror of the gardening crew (Anthony Green, Martin Hernandez, Crystal Ann Munoz, and Lucas Salazar). Nobody comes out smelling good.

This is a two-hour play that seems like 45 minutes. The lines come briskly, the humor is non-stop, and the Latino versus WASP border issue adds a tasty current events edge to the humor.

“You go in, and you’re judging each couple and changing your mind about who’s right, but at the end of the play, the person you’re judging is yourself. My hope is that people will take a moment to ponder what it will take for them to be a better neighbor,” said playwright Zacarías in a recent interview. “You can still laugh, have fun, and talk about hard things in a way where nobody’s off the hook.”