Sense & Sensibility on wheels at Portland Center Stage at the Armory. Photo by Patrick Weishampel/blankeye tv.

The basic plot remains the same as the book. Poor Mr. Dashwood dies, leaving Mrs. Dashwood (Lisa Birnbaum) and her three daughters at the mercy of the male heir, John Dashwood (Chris Murray). John’s wife Fanny (Kelly Godell) talks her husband out of leaving his mother and sisters with a living, so they are sent to live in a cottage.

As in all Austen tales, there is the issue of marriage. Sisters Marianne (Quinlan Fitzgerald) and Elinore (Danea Osseni) Dashwood are of age for marriage, but have no fortunes. Therefore, prospects are limited. Colonel Brandon (Ryan Quinn) attempts courtship with Marianne, but she prefers the younger, more dashing John Willoughby (Chris Murray). Edward Ferrars (Jamie Smithson) has eyes for Elinor, but finds himself unavailable. All is not lost, however. The benevolent Mrs. Jennings (Lauren Modica) steps in and spirits the sisters off to London for further hunting, leaving their indignant youngest sister Margaret Dashwood (Violeta Picayo) at home with her mother.

Kate Hamill has created a delightful take on Sense & Sensibility that not only remains true to the original story but also imbues it with several contemporary touches that lend timeless appeal for modern audiences. The Bedlam version takes everything a few steps farther, with its lightning-paced staging. Actors and props shoot across the stage on rollers, allowing for rapid-fire set changes. 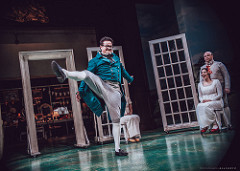 The story is embellished when Portland’s funniest woman, Lauren Modica as Mrs. Jennings and Bedlam’s Jamie Smithson as Robert Ferrars embark on some hilarious and seemingly unscripted forays. Modica’s in particular goes beyond the bounds of polite 19th century sensibilities!

Bedlam co-founder and creative director Eric Tucker deserves a standing ovation for the staging and direction of Sense & Sensibility. Scenic design is by John McDermott, costumes by Alison Heryer, lighting by Sarah Hughey, and sound by Alex Neumann. Choreography is by Alexandra Beller; Violeta Picayo is dance captain. The cast includes well-known Portland actors and several from the Bedlam company. Several cast members play multiple roles, including those of dogs, horses, and even trees. 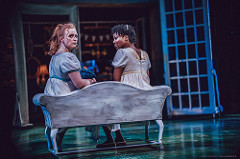 This exuberant production runs though February 10, and is suitable for ages 10 and up.