It is based on Gibson’s 1957 Playhouse 90 teleplay of the same name, which he based on Helen Keller’s autobiography, The Story of My Life. The play debuted on Broadway in 1959 and won several Tonys including Best Play. It starred Anne Bancroft as Annie Sullivan and Patty Duke as Helen Keller, who reunited in 1962 for the movie version.

The Twilight production, directed by Doreen Lundberg and produced by Dorinda Toner, features Valerie Asbell as Annie Sullivan, Helen’s governess/teacher. The daughter of Irish immigrants, Sullivan contracted an eye disease called trachoma, which left her nearly blind. She and her brother, Jimmie, were sent to an almshouse in Tewksbury, Massachusetts, after their mother died and their father abandoned the family. Sullivan later was educated at the Perkins School for the Blind in Boston, and underwent nine eye surgeries prior to going to Alabama in the 1880s to teach Helen.

Helen (Olivia Holmstedt) was rendered blind and deaf at an early age, the result of an unknown disease. Early in the play, we learn that her parents, Captain Keller (Rick Barr) and Kate (Nina Monique Kelley) have allowed the child to run wild, completely undisciplined, to the discomfort of Helen’s half brother Jimmie (Blaine Vincent III), and Aunt Ev (Lisa Pauley Grab). Viney (Tony Domingue) goes along with the spoiling of Helen per his employers’ wishes.

Thus, when Annie arrives at the Keller household, she faces two challenges–taming the kid and educating the parents–before the education of Helen can begin.

Twilight Theater Company is a small neighborhood theatre located at 7515 N. Brandon Ave., Portland, 97217. It is a not-for-profit organization that endeavors to meet a growing need for accessible, innovative theatre in the North Portland community, both for audiences and artists. The Miracle Worker runs through December 22. 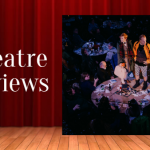