My friends, we’ve got trouble! Right here in River City!

Third Rail Repertory Theatre has returned to live performances for the first time since the pandemic with Meredith Willson‘s Tony-winning musical The Music Man, and it’s a Music Man like you’ve never seen it. Directed by Isaac Lamb, with music direction by Stephanie Smith, this six- person cast of women and non-binary performers play all of the characters in the play while accompanying themselves. It is quite the show! 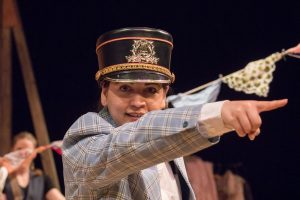 Crystal Munoz, as Harold Hill with his fellow passengers, opens the production with a stunning one-woman rendition of men gossiping on the train. They are talking about nonother than Hill himself, a con artist and a skunk, by all reports. And where is the nefarious Hill these days? Little known to the passengers, he is sitting next to them, bound for River City, Iowa where he plans to con its unsuspecting residents into buying musical instruments for a boys band that will never be. By the time the instruments arrive, Hill will have vanished with a valise full of cash.

As so often happens, things do not go according to plan. When Hill encounters Marian the librarian (Dru Rutledge) he quickly realizes she is on to his tricks. But, her little brother Winthrop (Jennifer Davies, understudy for Madeleine Tran), is a victim of bullying because he stutters. Hill’s heart takes a sharp right turn and he decides to help Winthrop. Kymberli Colbourne as River City mayor, Tara Velarde, and Melory Mirashrafi (understudy for Maeve Stier) complete the talented and up-to-the-task cast.

The idea for this production began when director Isaac Lamb workshopped a concert staging of The Music Man as a Third Rail Company Innovation project in 2018. It evolved from the core concepts explored in that workshop—the essence of the story presented with six female and non-binary actors in a close-up setting. This, in turn, is not unlike when Meredith Willson and his wife traveled from producer to producer across the country, pitching The Music Man by performing all the roles.

It took years for The Music Man and story tweaks by Franklin Lacey to get produced. When it finally hit the Broadway stage in 1957, it won five Tony awards including Best Musical. It currently is enjoying a 2022 revival on Broadway 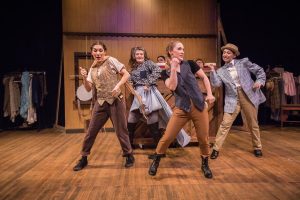 There are some great moments in this version of The Music Man. music and songs hearken to yesteryear, with wonderful twists on traditional favorites. Particularly special are the barbershop quartet a cappella versions. Dru Rutledge’s soaring soprano is opera stage worthy. Jennifer Davies singing “Gary, Indiana” was a show-stopping moment. As for the 76 trombones? Well, quite frankly, they weren’t there. Fans of the original production will miss those bigger sounds. But not that much. 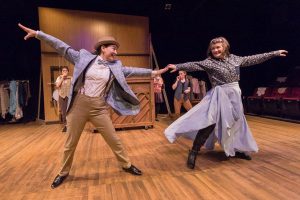 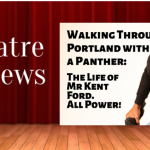 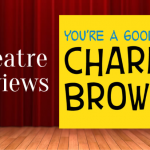