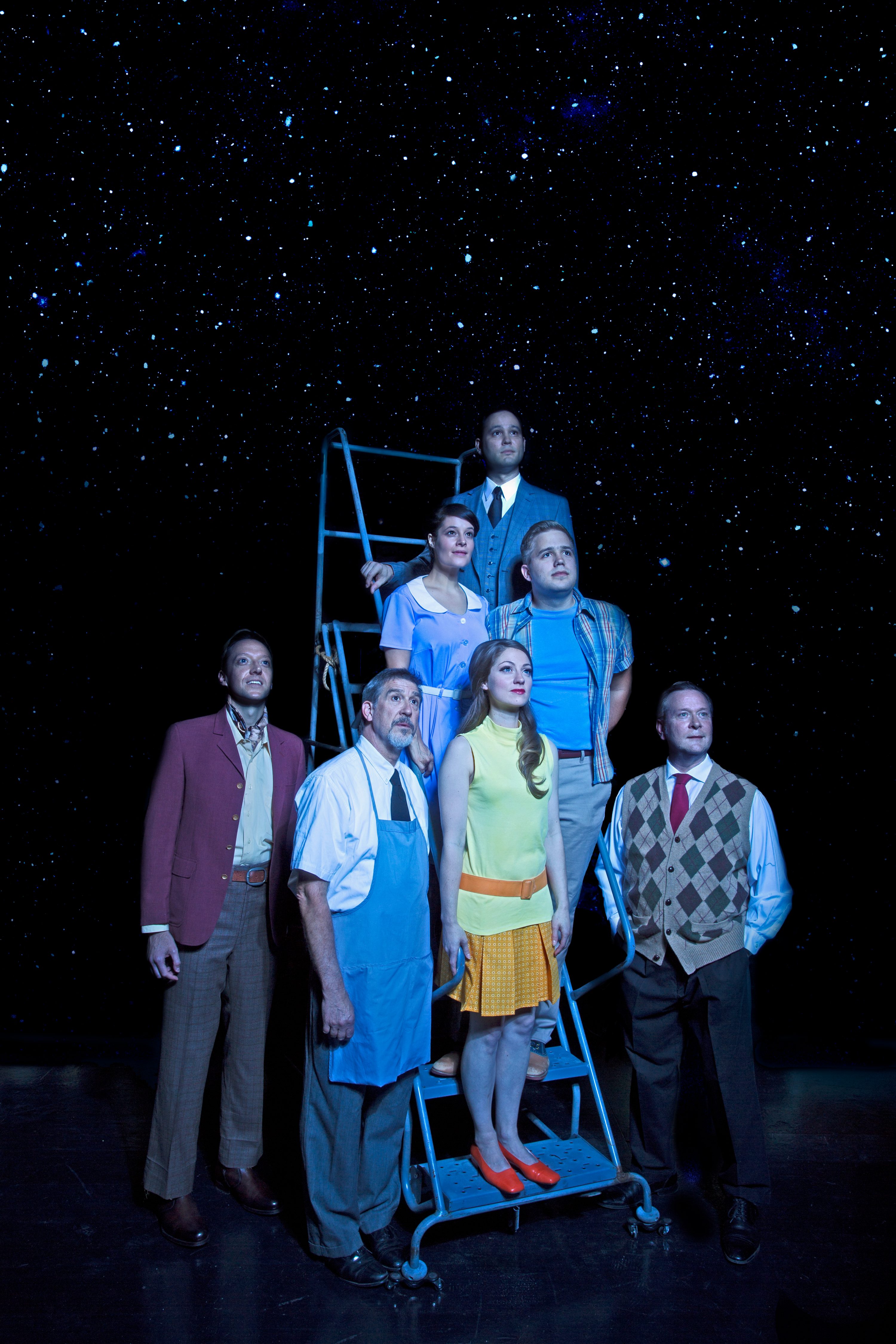 The cast of Fly By Night assembles on a starlit night. Photo by Craig Mitchelldyer.

“The map of this story is both tiny and vast. And it is as simple and complex as choosing a path to travel and trusting it will connect to all other paths,” the philosophizing Narrator (Joe Theissen) informs us in the opening lines of Fly By Night, now playing at Broadway Rose Theatre in Tigard.

It’s 11/9/64. Cecily McClam dies and her husband Mr. McClam mourns and plays La Traviata on his record player. His son Harold (Benjamin Tissell) makes sandwiches and dreams of becoming a rock star. And two young women, Daphne (Malia Tippets) and Miriam (Rebecca Teran), set out from South Dakota to seek their fortunes in New York City. Daphne is a fireball, set on becoming a Broadway star, while homebody Miriam likes her job as a waitress and would be happy enough staying in South Dakota and refilling coffee cups.

The day marks the beginning of a year-long odyssey in which these players, plus Crabble (Tim Blough), Harold’s boss at a sandwich shop, and Joey Storms (David Caldwell), a well-heeled playwright and producer, are swept up into a cosmic black-comedy musical.

The Narrator reminds us that we all come from stardust. (Ask any astronomer. It’s the truth.) That there is much happening in the invisible world. Miriam trusts the stars. Lovers are star-crossed. And so it goes. It is a long play, conceived by Kim Rosenstock and co-written by her and two fellow students–Michael Mitnick and Will Connolly–while they were in the Yale School of Drama.

It’s a crazy, eclectic play of coincidences, parallel universes, and a crazy fortune teller. For me it brought to mind Our Town with a hint of Terrence Malick’s Tree of Life. (It also could bring to mind Wes Anderson. It’s that quirky and mysterious and fun.)  It’s a journey of ordinary people with ordinary lives who, under the seamless directing of Isaac Lamb, somehow come together to become more than the sum of their parts.

Joe Theissen is outstanding as the Narrator, spreading helpful (though unheard and unheeded)  commentary, doubling up as the fortune teller, pointing out the foibles of the other characters on stage.

Fly By Night was developed at TheatreWorks in Palo Alto, California, and premiered there in 2011 starring former Portlander Wade McCollum as the Narrator. By 2014, it had made its way to Playwrights Horizons, off-Broadway, where it was nominated for four Drama Desk awards. It runs through October 23, Thursdays through Sundays, on the Broadway Rose New Stage, 12850 SW Grant Avenue, Tigard.