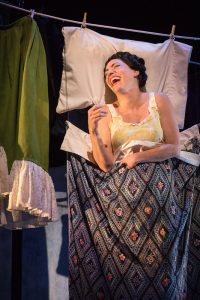 When Mr. Powell arrives for his interview at La Casa Azul, the famous and infamous Frida Kahlo is abed, as she mostly was during the last few years of her life. Her snarky greeting to Powell reflects a woman in pain, both mental and physical. It also bears testament to a woman of great spirit, ego, and justifiable pride.

Vanessa Severo’s Frida…A Self Portrait is onstage at Portland Center Stage at the Armory, marking the theatre’s return to live performances. And what a return it is, with Savero performing her one-woman show on the U.S. Bank Main Stage. “Set on the eve of Frida Kahlo’s death, this intimate solo show plunges into the brilliant, nuanced world of Kahlo’s tumultuous, extraordinary life—but goes far beyond biography. Instead, Brazilian writer and performer Vanessa Severo cracks open a powerful portal between herself and the celebrated Mexican artist, bringing breathtaking physicality and raw honesty to this stunningly creative production. Ultimately, the play paints a portrait of two artists, blending Kahlo’s life with Severo’s own experiences as a child born with a congenital disorder to parents who were newly immigrated to the United States,” said Claudie Fisher.

Crippled by polio as a child, Frida recovered, more or less, under the strict oversight of her Teutonic father. Then there were “the two accidents–the trolley and Diego”. After a long recovery from a bus accident that left her damaged for life, Friday met and married Diego Rivera, internationally known for his paintings and murals. (Their stormy relationship was well-documented in the 2002 film Frida starring Selma Hayek and Alfred Molino.) This story focuses intently on the inner Frida fighting to find her truth. 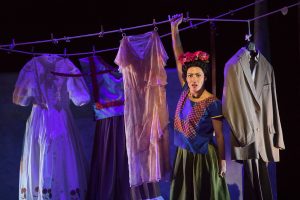 For this production, scenic designer Jacqueline Penrod and costume designer Katherine Davis created the perfect storm of beauty and magical realism. Three clotheslines strung with costumes and accessories depict the people and events in Frida’s life. From the opening scene, as Frida greets Mr. Powell from her bed, through the stories she tells, the audience is taken on a magical journey, the actor bringing each moment of it to life as she caresses her precious memories.

It’s an unforgettable experience. “I’m still thinking about Frida and the incredible feat that performance was!” stated my guest at the play.  “The way [Severo] intertwined her own story into that of Frida forced the audience to confront the concept of ‘disability’ in the actor’s real life as well as in the character’s. Both showed how their identities and strengths were shaped by their suffering. And yet they both evolved to be what they wanted to be in spite of disabilities.  It would have been a very different message and play without that connection.” 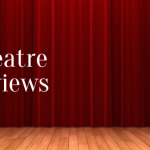