I am determined to prove a villain/And hate the idle pleasures of these days. –Richard III, Wm. Shakespeare 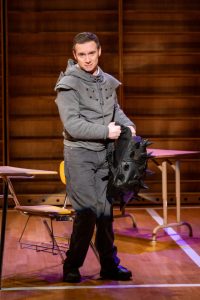 Richard Glouchester (Christopher Imbrosciano) is a miserable 17-year-old. Smart, angry, disenfranchised, an anomaly among his peers, who moves with unusual gait due to cerebral palsy. And yet he aspires to be king–er, rather, senior class president. Standing in line before him is Eddie Ivy (Nick Ferrucci), football quarterback, tall and handsome, not too bright. But that doesn’t matter. Eddie may be a bully who picks on students with disabilities, but he has what Richard wants. Status. And the girl, Anne Margaret (Kailey Rhodes).

Mike Lew‘s Teenage Dick, playing at Artists Repertory Theatre, is a brilliant play that brings Shakespearean tragedy to the halls of Roseland High School and studies the inner lives of its inhabitants through the lens of disability.

What starts as mere revenge becomes Richard’s obsession. He tries to enlist support from his friend Barbara Buckingham (Tess Raunig), but she’s not enthusiastic. “Why can’t you be happy just being yourself?” she asks. “I come to bury Eddie, not to praise him,” declares Richard. And then he finds the certain path to destroy his rival–Eddie’s ex-girlfriend Anne.

As Anne, Kailey Rhodes is a dynamic force in the play–an aspiring dancer, a woman with secrets, who develops empathy for Richard and makes room for him in her life and her heart. As an actress, Rhodes is a force in whatever she does. She and Imbrosciano create magic on the stage.

Josh Hecht directs this tale of guile and evil deeds that is based not a little on William Shakespeare’s tragedy Richard III. We hear utterings of the Renaissance variety. The costumes (Sarah Gahagan), even the characters’ names harken to Shakespeare’s work. Napoleon Dynamite this is not, the audience learns, as Richard’s grand quest for power becomes ever more diabolical.

Human nature has changed little in 500 years. People long to be recognized and treated as equals. When they’re not, both plays tell us, cruelty becomes a viable tool.