…in other people’s lives is the theme of Broadway Rose Theatre Company‘s latest production, The Story of My Life. With music and lyrics by Neil Bartram and book by Brian Hill, this two-man show in video format streams now through February 28.

Alec Cameron Lugo and Andrew Wade in The Story of My Life. Mark Daniel photo.

Thomas Weaver (Alec Cameron Lugo) and Alvin Kelby (Andrew Wade) met in first grade. Thomas was the more outgoing; Alvin was a little odd. But they decided early on that “the battlefield of childhood was much better with two”. As children, they agreed that when one of them died, the other would give the eulogy at his friend’s funeral. As the play opens, Thomas attempts to write Alvin’s eulogy as he explores the friendship and how it ended, and Alvin’s mysterious death.

Thomas went away to college and became a renowned author. Alvin stayed in their small town taking care of his ailing father and running the family bookstore, and remained an average guy. They were best friends until the moment the friendship “splintered and cracked”. But it didn’t end there. 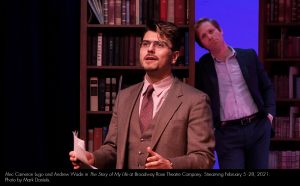 Lifetime friendships are delicate, complicated, and ever-changing beings. Using the leitmotifs of snow angels and the Frank Capra film It’s a Wonderful Life, this production explores the fragility and enduring strengths of such friendships through Thomas’s recollections of his and Alvin’s time together.

Lakewood Theatre Company’s production of My Funny Valentine: Great Comic Love Songs from Musicals You May Have Missed. Screening for the first time since its previous sold-out engagement, this musical comedy revue features Lakewood’s star performers in an evening of clever comic songs, hilarious theater mishap stories, and engaging audience participation games. Online viewing will be available from February 12 – 18 only.

Special note: The first 50 people who register for this program will be entered into a drawing for great prizes, including wine, chocolate, and even a commemorative brick in Lakewood’s brick pathway.

Comedienne/singer Joan Freed hosts this unique show, which includes rarely-heard musical theater songs about the charms and challenges of romance. Viewers can test their knowledge in the fun “Name That President!” game, appropriately included since February is the birth month of our two most famous presidents. Then there’s the hilarious “Two Truths and a Lie” guessing game. Funniest of all are the true behind-the-scenes theater stories the actors share.