Many years ago, the king and queen of a distant planet worried about their infant son. The planet was at war, and to ensure his survival they sent him far away…to Farmsville, USA, where he was adopted and raised by Earthlings.

That’s the story being told in Up and Away, a charming and seductive new musical comedy with book and lyrics by Kevin Hammonds and music by Kristin Bair, that made its West Coast Premiere at Broadway Rose Theatre Company last Friday. 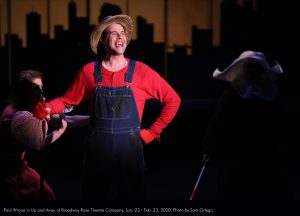 Paul Wrona in Up and Away at Broadway Rose Theatre Company. Photo by Sam Ortega.

As these things happen, our hero grew into a strapping young lad…who was digging a latrine with his brother one hot, sunny day, when they unearthed a large silver egg.

Mother Jessup (Danielle Valentine) explained the phenomenon as best she could to the Jessup boys, Joe (Paul Wrona) and Jerry (Colin Stephen Kane). And then Joe, the restless one, donned the Gauntlets of Providence (found in the egg), and headed to the Big City “sadistic and vile” to right all wrongs. A new superhero was born! 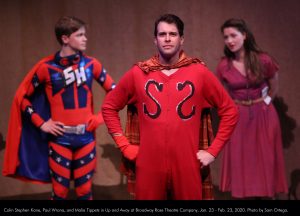 In the city, Joe encountered villains galore, met and fell in love with Susie Dare (Malia Tippets), was befriended by billionaire Ronak Fairchild (Joe Theissen), and even learned to fly. Meanwhile, brother Jerry, miles (but mere heartbeats) away, grew concerned and set out to find Joe.

It is difficult to imagine a less super-looking superhero than Joe in his red onesie and orange tablecloth cape! But that is the beauty of Up and Away. It’s fun. It’s joyful. And it’s laugh-out-loud funny! The tunes are the kind that can stay in your head, yet the music is complex and engaging.

Villains in the sadistic and vile Big City. Photo by Sam Ortega.

While playwright Kevin Hammonds borrows some from DC Comic characters Superman and Batman in a way that gives the story a familiar feel, Up and Away is its own special tale with its own unique superheroes, an assortment of crazy villains, and quirky plot twists. It’s the type of show that will delight the entire family.

Up and Away premiered in Pittsburgh in 2018, and this is its second production. Hammonds and composer Kristin Bair came to Portland for the opening and were thrilled to see their play so well-received.

Up and Away runs through February 23 at the Broadway Rose Theatre Company’s New Theatre, 12850 SW Grant Avenue, Tigard.

Get ready for the Fertile Ground FestivalPlay Reviews, The Writer's World
Iced tea and valiumPlay Reviews