Yes, folks, live theatre is returning to Portland. Soon! Several local theatres have announced their lineups for the 2021-2022 Season. There are some very exciting productions coming our way.

More immediately, Broadway Rose Theatre Company mounts its first musical welcoming live audiences weekends beginning Thursday, July 8 through 17. Analog & Vinyl, a musical comedy, features Molly Duddlesten, Jessica Brandes, and Alec Cameron Lugo. Tickets are now available to the general public. The theatre will operate at 50 percent capacity with safety protocols. Visit the website for details and tickets. A pre-recorded, fully staged production also will be streaming from July 16-August 1. Depending on sales and revised state guidelines, Broadway Rose will extend the run of the live production as needed through August 1.

Portland Playhouse‘s new season opens with Barbecue by Robert O’Hara. The O’Mallerys have gathered in their local park to share some barbecue and straight talk with their sister Barbara, whose spiral of drugs and recklessness has forced her siblings to stage an open-air intervention. But the event becomes raucous and unpredictable as familial stereotypes collide with hard realities, and racial politics slam up against the stories we tell—and maybe even believe—about who we were and who we’ve become. It opens October 20

Other shows include A Christmas Carol, Thurgood, Titus Andronicus, and Belle: An American Tall Tale.

Artists Repertory Theatre opens its season with Campfire Stories, an outdoor storytelling event you won’t want to miss! For two weekends in September, spend a fall evening around a campfire enjoying your favorite outdoor treats while an array of Portland storytellers spin tales of wonder. The campfire adventure is followed by The Chinese Lady in October and The Great Leap.

There will be more shows not announced at this time. Since ART’s new venue at SW 15th and Salmon is still under construction, performances will be held at Portland Center Stage’s Ellyn Bye Studio. 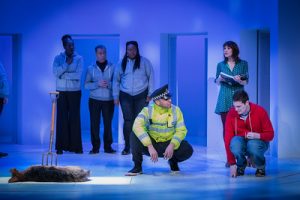 Delphon Curtis, Jamie Sanders and cast in The Curious Incident of the Dog in the Night-Time. Owen Carey photo.

Portland Center Stage‘s 2021-22 season opens in October with Frida…A Self Portrait followed closely by the return of The Curious Incident of the Dog in the Night-Time. This latter play was cancelled after its first week of performances when the pandemic forced theatres to go black.

Also returning to PCS this season is the celebrated Hedwig and the Angry Inch. The season also includes August Wilson’s Gem of the Ocean, Lin-Manuel Miranda’s Freestyle Love Supreme, Lauren Yee’s The Great Leap. In an ironic nod to deadly viruses, the season finale will be Rent.

Standby for further announcements as other area theatres plan their openings. Visit the websites for ticket information. The excitement is about to begin! 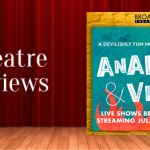 Broadway Rose lights up the stage with Analog & VinylPlay Reviews