An outstanding and gritty performance of Macbeth is now onstage at the Ellyn Bye Studio at Portland Center Stage at the Armory. 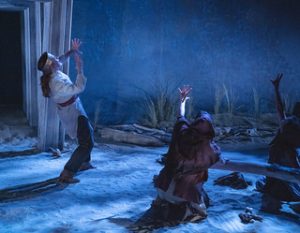 The play is intriguing in that it has been edited down to a 90-minute version of itself by Obie-winning director and choreographer Lee Sunday Evans. Her thrilling, spare adaptation loses nothing in translation. If anything, it renders the Shakespeare tragedy more accessible. Cut to the essentials, this Macbeth features almost nonstop action.

The play opens with the cast in full witch mode, “three wayward sisters” on a Scottish heath invoking supernatural forces and prophesying. When Macbeth and his soldiers encounter them, he is told he will be king. Back home at Elsinore, he tells Lady Macbeth of the prophesy. Since King Duncan is staying at their place that night, she encourages Macbeth to dispose of their guest so that he can become ruler sooner rather than later. When he demurs, she tells him “screw your courage to the sticking point”, thus setting in motion a series of vicious murders as Macbeth grows alternately more power mad, guilty, and paranoid. 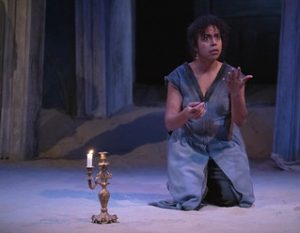 It struck me this time around how quickly Lady Macbeth feels guilt for their actions. There is blood on her hands that will not be washed away. Meanwhile, Macbeth continues, relentless. “I think our country sinks beneath its yoke, smacking of every sin that has a name,” says one character. Thus, Macbeth also becomes a play for our times.

There is symbolism in Stephen Dobay’s simple but evocative set as well. Elsinore is a crumbling house built on sand. And in the end, as is already known in this most familiar of plays, Nature symbolically rises up to reclaim what was lost as Malcolm and MacDuff lead their army, cloaked in branches, toward Elsinore to remove the evil king from power.

Macbeth runs through November 24 in the Ellyn Bye Studio at the Armory. It’s a must-see for Shakespeare aficionados and any students out there who may be studying the play!