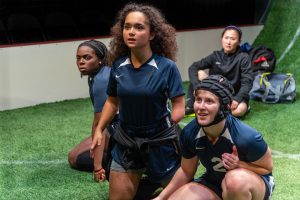 The Wolves, a play by Sarah DeLappe and the name of DeLappe’s fictional indoor soccer team, tells a deep and revealing story about high school girls thrust together in a very competitive team environment. Now onstage at Portland Playhouse, the play provides an inside look at this oft-overlooked group through their pre-game stretch sessions.

Anyone who has been or known a teenage girl can attest to how they can be screeching furies one minute and soft as cream puffs the next. Few of us, I fear, take measure of their determination, gutsiness, and toughness, their intellect, physical strength, cluelessness, ability to transform in a moment, and the great empathy that seldom is revealed in their everyday conversations.

As The Wolves opens, one of the girls starts talking about the Khmer Rouge. Most of them don’t know what it was. The conversation drifts to the efficacies of various feminine products. #7 (Quinlan Fitzgerald) drops several F-bombs and sets #14 (Alyssa Longoria) up with a blind date. Keeper #00 (Lauren Vander Aarde) runs out to vomit. #11 (Fiona Palazzi) knits scarves for kids in cages.

There’s the mysterious new girl #46 (Kailey Rhodes), and everyone is curious about her. Team captain #25 (Barbie Wu) gives orders like a drill sergeant. #2 (Delaney Barbour), #13 (Andrea Vernae), and #8 (Ash Heffernan) have opinions on everything. Soccer Mom (Maureen Porter) weighs in near the play’s end.

What is a play but a story? In this case, nine stories. Each team member grapples with evolving team relationships and deals with physical and mental adversity on the field and off. Their highly punctuated language reveals the real ebbs and flows of teenage girl conversation. Indeed, playwright DeLappe is an avid listener of other people’s conversations. Like any true writer, she is tuned-in wherever she goes–subways, coffee shops, the girls she tutored during her college days–and every word rings true.

The Wolves continues its Portland Playhouse run through October 20.