Wolf Play begins with a most unsuitable premise. Peter (Chris Harder) and his wife have decided they no longer want their adopted son Wolf (Christopher Larkin). The kid is called Peter, by the way. Peter Junior. He calls himself Jeenu. 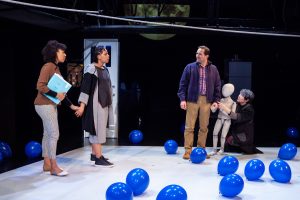 Wolf is advertised on Facebook by his adoptive parents, in order to be re-homed. And Robin (Ayanna Berkshire), who desperately wants a child, agrees to take him. Her wife Ash (Tamera Lyn) needs to be brought up to speed. Her brother Ryan (Vin Shambry) thinks she’s crazy.

Wolf/Jeenu, the central character, is eight years old and very smart. He knows he has been abandoned, and his inner dialog is goes something like this: “Evil wolves are abandoned…abandoned wolves are invisible.” And thus, he becomes “invisible”, slipping in and out of rooms, overhearing conversations not intended to be overheard, longing to be part of the pack but unsure how to belong. 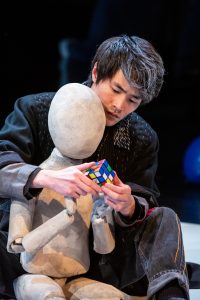 The world premiere of Hansol Jung‘s Wolf Play opened at Artist’s Repertory Theatre on March 16. The play was commissioned by Artists Rep as part of its play development program Table/Room/Stage led by theatre dramaturg Luann Schooler.

Wolf Play is a beautiful piece of work, from its shocking beginning where a small child (personified by a faceless puppet with Wolf/Jeenu directing his moves) is turned over to strangers, to its equally shocking and disturbing ending. It reverberates with fresh, tough, tender, and timely writing, smart dialog, and even hilarity as it delves the depths of family and societal dysfunction and what is required to make a pack. It is a triumph of modern, issue-based storytelling. 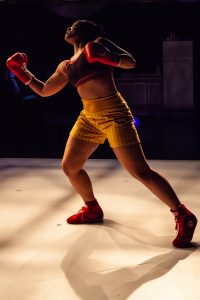 The play runs on the Morrison Stage at Artists Repertory Theatre through April 7.

A dark and stormy farce!Play Reviews 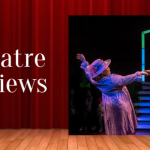 The power of the hatPlay Reviews